Oculus Rift has been one of the best VR headsets that we have in the VR market and probably the best right now for the year 2017. It has been a great journey for team Oculus where they started off by disappointing and selling just the VR headset without the controllers to selling the headset along with the amazing game changing touch controllers.

This is one of the most expensive and innovative VR accessories among all the others mentioned in the list. Virtuix Omni is a treadmill where it replicates your movements in the Virtual World. This solves a major problem with the VR headsets and that being making your experience completely immersive.

Your movements in real life being replicated completely in the VR world would possibly be the only shortcoming of the Oculus Rift, but with this accessory, you would easily overcome that and make the gameplay more realistic. However, it is priced at $699 which is a lot just for a VR accessory which would be for your personal use, although it would be better to pool in for such accessories which are as expensive as the VR headset itself.

Do check out the Virtuix Omni and write down your views in the comment section below!

Leap Motion Controller helps in tracking your hand movements in the Virtual Reality world. It is one of the best ways to get some hand tracking possible with the VR headsets. However, we do have the Vive and touch controllers for the HTC Vive and Oculus Rift respectively but they do not offer precise finger tracking. It is an amazing add-on if you want a more precise tracking system in your VR world.

You can mount the Leap Motion controller right in front of your VR headset which will help it pick up your hand gestures more accurately helping you to replicate them in the VR world. Leap Motion controller is really amazing to pair it up with your Oculus Rift and once you use it, you are going to get hooked on it since it makes the entire VR experience immersive.

This is one of the not essential add-ons to your Rift but it is definitely one of the most interesting add-ons that you can ask for. The SubPac M2 will give you more immersive gameplay in VR y providing really high audio quality and submerging you into the VR world. It is like strapping an audio system to your back and letting you enjoy all the audio details of the VR world.

From a gunshot to an air breeze in the VR world, the SubPac M2 will give you the most detailed and high audio quality. It provides a unique dimension to gaming and multiplies the effectiveness of the Virtual Reality for your high-end Oculus Rift. You can even place it over your gaming chair or wear it to feel the difference in the gameplay.

It would have been a must have accessory if it was not as expensive as it is, however you can check ou the amazon reviews and let us know in the comment section what do you think about the SubPac M2.

Another way of maintaining your Oculus Rift VR headset is by storing it in a case. From my personal experiences, I can ensure that keeping things safely inside a dust bag or a case really helps you in maintaining their quality over time. If you store the Rift in a case then even in the case that you drop the case or accidently spill something over it, your Oculus Rift is going to stay intact. I have dropped it a couple of times and that is when I thought of buying a case for it.

This case is pretty spacious and you could even store in your touch and the gaming controller that you use with the VR headset. Since the Oculus Rift is quite an investment having a case that would keep all the essentials in place is something every Rift owner should consider.

It comes with sections inside the case for easy storage all the things related to your Oculus Rift. This case is very useful for storing the VR headset and trying to maintain it without causing any damage to any of the important attachments that come along with the headset. 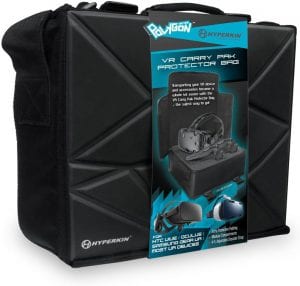 When it comes to the PC VR headsets like the Rift or the HTC Vive, the eye mask becomes essential due to the prolong periods of gameplay. In the case of smartphone VR headsets, the content is relatively of smaller time durations as compared to the titles that we commonly see on the PC VR headsets.

The sweat that accumulates at the corners of the VR headset is just annoying and if someone else plans to use the VR headset then it is simply unhygienic. The eye mask comes in handy when you have to share the VR headset with your friends and you really it to be sanitary without handing them moist padding on the VR headset.

It is quite important that you keep these eye masks handy at all time since there are a couple of VR titles that are time-consuming games which are definitely going to make you sweat inside that VR headset. 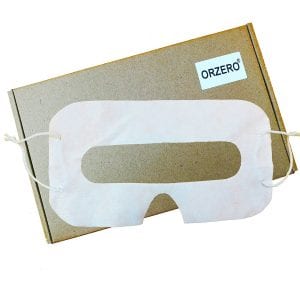 Hope you liked all the Best Oculus Rift accessory ideas and do mention in the comment section which one is your favorite.

If you liked the post then don’t forget to share it with an Oculus Rift obsessed buddy!