Ever wanted to fly? Well, we all have wanted to fulfill this dream at some point in our lives and it feels impossible to do so within our confined rooms but VR has been a step ahead and made that possible.

To all you height suckers, Sony has included Eagle Flight to be one among the top 50 games which will be released soon with the PlayStation VR. A Ubisoft creation, Eagle Flight is a really immersive and interesting game to play in the VR world. It is a first person game where the player is embodied in an eagle and is trying to successfully complete all missions.

This game lets you roam around the streets of Paris and move around arches, in and out of nooks and corners along other breathtaking experiences. It looks like a simple game but with the right idea it has proved to be one of the most engaging games that a VR enthusiast could play. All you need to do is move your head and accordingly the direction of flight of the bird changes and to increase or decrease the speed you need to use the controllers.The game uses the head tracking functionality of the VR headsets to an advantage and that is a major factor which makes the game immersive. 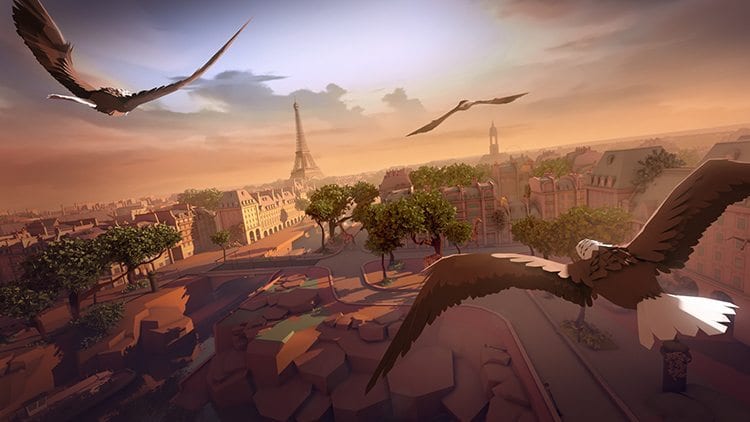 The most interesting aspect of this game is the three against three competition where the gamers try to take on the flag and you can even attack eagles of the other team and try winning the flag. To see how it exactly works check out the video below:

Hitting the opponent eagles can be a little difficult while gaming, however, you can use the shriek attack which can automatically kill the eagle in your path. This game involves a lot of precise head tracking movements and has a great immersive experience.

Even with the high speeds and sharp turns the game did not induce any motion sickness in most of the players. I think this game has perfectly balanced the angle of turns and various other aspects to keep the motion sickness in check and help VR addicts like us play the game for a much longer period of time.

This game has already been released with the Oculus Rift and you will find many positive reviews about this game. This game will make you feel  like you are into a totally different world and the way the VR headsets have been incorporated into the game makes the gameplay a delightful experience. Once you have played the demo version of this game, you probably would be interested in playing the entire game which has the multiplayer aspect added to it.

The best part about this PS VR game is that it is a first person game and you can play it without being motion sick which is pretty rare. With all the speed, twist and turns involved, this game has to be one of the best experiences with the PlayStation VR and I’m waiting to play the game once the PlayStation VR is released on October 13, 2016.

What do you think about the game?