MergeVR Cube is a holographic cube that you can hold in your hand, touch, manipulate and do a lot of things. Have you ever thought of holding a working model of the human heart in your hand or a 3d model of a city? The lightweight Merge VR Cube can convert into any 3D object. It is essentially a holographic object that your phone’s camera can recognize when you slot it inside a headset.

MergeVR Cube is an AR(Augmented Reality) device that lets users interact with holograms of all kinds. This inexpensive Rubik’s cube like gadget is made of foam. You don’t have to worry about breaking it. It does not look like an impressive device when you see it with a naked eye. The MergeVR Cube app, Miniverse turns this device into an interactive holographic device.

It takes technology to another level. Your dog might think of it as a soft toy that you have brought for him to chew, but you are holding an entire planet or a human heart or some other 3D object in your hand. You can enjoy a fully immersive experience with the VR headset, but you can also view the objects without strapping a headset. You can view the same thing with other people for entertainment or interactive learning. 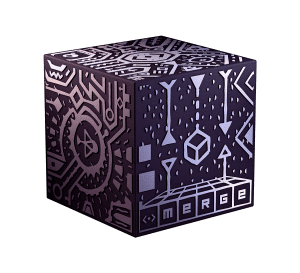 It is a tactile object that you can hold in your hand, move around and physically manipulate and you don’t have to rely on gesture based controls. There will be a variety of interaction models in augmented reality or mixed reality. MergeVR is one step forward towards merging the physical and the digital world. It is built on CVT(Computer Vision Technology), and any RGB camera on the phone recognizes it. The phone uses the camera to scan the device and uses a game engine to bring the 3D models to life.

We have all experienced the VR(Virtual Reality) which takes us to a digital world which is virtual. MergeCube VR does the opposite. It brings the digital world to the real world through the holographic cube that brings digital 3d models to life that we can interact with.

What Do You Need To Use MergeVR Cube?

MergeVR Cube works with any device, be it an Android or an iOS device. You don’t necessarily need a MergeVR headset to use the MergeVR cube. Any Google Cardboard headset allows you to interact with the MergeVR Cube. You don’t even need a headset at all if you don’t want a fully immersive experience. All you need is a smart device with a camera that can run the ‘Miniverse’ app.

What Can You Do With MergeVR Cube?

MergeVR cube is the toy of the future. You will find it in every kid’s bedroom. For instance, its fireworks app makes the fireworks go into your room just like a real firework. Such games overlap the reality and give us a real augmented reality experience.

You can also use it as a controller for your games. As you can interact with the device and it works according to your hand-movements, it works as an excellent controlling device for your games. For instance, it can be used to control your fighter jet in a shooting game in which you have to maneuver it to prevent collisions.

MergeCube can act as an excellent educational tool as well. For instance, if you are a biology teacher and want to show your students how the heart works, you can do that using the MergeCube. The possibilities are endless, and we have just entered the realm of augmented reality.

You can get 3D models developed by your team to show your client what the final product will look like without the need to create it first. It ‘s hard to make changes to physical 3D models, but digital 3d models can be altered easily as per client’s requirements.

With cameras, we started taking pictures to store memories. With the beginning of 21st century, we began shooting videos with our camera phones. The era of shooting 360-degree videos started, and MergeVR is a perfect device to relive our experience entirely.

Who Is It For?

The Merge VR cube can be used by everybody from a young child to a ninety-year-old man. It is relatively inexpensive, and you just need a smartphone to use it. Everybody will find applications according to their taste and preferences. The Computer Vision Technology can serve everybody from a gamer to a teacher, a businessman to an artist.

With Holocube, Merge has taken us to the world of hyper reality where digital world steps inside our world. Soon, we will be able to see the objects that exist digitally in our world through the augmented reality gadgets just like MergeVR Cube. Moreover, we will be able to interact with them just like we do with real objects.

How Are New Programs Developed For Merge VR Cube?

Developers can get the SDK from MergeVR website. New Programs can be developed using Unity 3D Engine. Unity applications can be made to work with MergeVR Cube with the help of Vuforia SDK.

This holocube by Merge merges the virtual reality and augmented reality together. There is a huge scope of development of apps for Merge VR Cube. In the upcoming years, we can expect to see a large number of augmented reality apps for every thing imaginable.

To conclude, Merge VR cube takes you into the world of augmented reality. MergeVR Cube is the first step that combines the digital world and the real world. In future, we can expect more sophisticated Augmented Reality gadgets, but MergeVR Cube is good enough to give us a taste of it.