With all the VR ready gaming laptops, MSI gaming laptop review for the VR ready GT73VR Titan is something which should be expected. MSI is one of the leading laptop companies and is known for its gaming series laptops. The new NVIDIA pascal architecture GPU is all over the place and with the Virtual reality kicking in, laptop companies have found a way to tap this opportunity and provide gamers with high-quality VR ready laptops. Let’s get into the nitty -gritty details about this VR ready laptop. 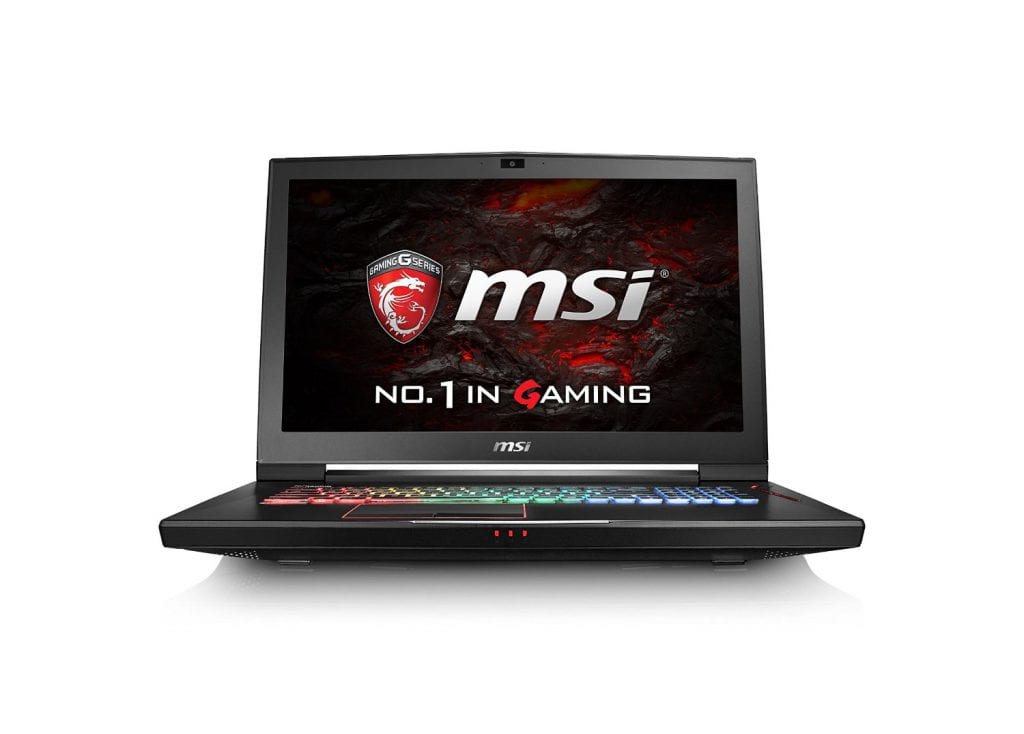 The design on MSI laptops have been pretty standard and they tend to remain the same even in this laptop. I think they like keeping the same standard look for all the MSI laptops which is not bad but it can get  a little boring if you are buying MSI laptop for the second time. They have the usual red and black combination on their laptops with angled lines and the MSI logo centered between them.

The display is a nice 1080 HD quality along with 178-degree wide viewing angle IPS panel which makes viewing the screen much easier from various distances and angles. The laptop does sport the G-sync feature which helps in dealing with the input lag and image tearing which is one of the major features that most of the VR ready laptops have been including in their new laptop launches this holiday season.

It used to be so annoying when we had to witness the image on the screen split into parts and that made me to either pause for a while or maybe shut down the entire game. At least with G-sync those problems are solved forever and the gameplay is going to be smoother than ever. The laptop is relatively heavier than the HP Omen 17, but even then it isn’t too heavy since you have many other VR laptops weighing around the same. The display of the laptop gives a very lifelike gaming experience.

Although one can expect for a 4K resolution display when you compare it with its rival the HP Omen, but the 1080 HD matte quality on this display is not bad at all and it can be an advantage when it comes to battery life since the 4K display drains the battery in any laptop, so lets hope that we see some better improvements in the battery life of this laptop. 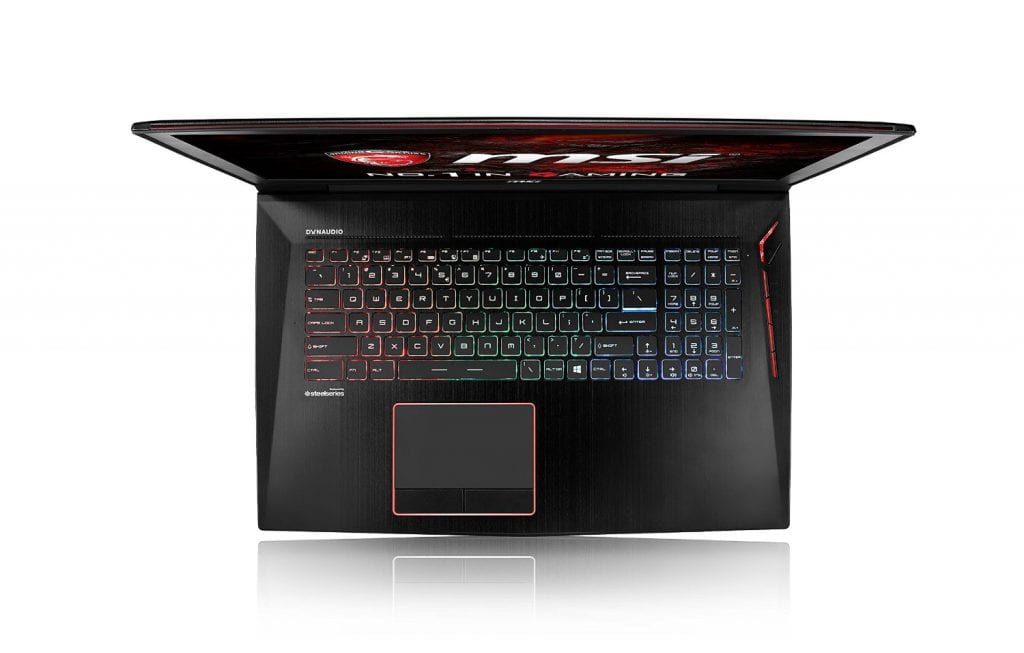 The laptop has the SteelSeries keyboard which is backlit and typing on this keyboard is way comfortable due to the spacing of the keys. The keys are firm and you might need to press relatively firmly in comparison to other keyboards but still, I liked the way the keyboard slowly merged into the number pad and the ease with which you can use the directional keys for gaming. Overall the keyboard of most of the MSI laptops is similar and comfortable.

The touch has a LED lighting lining around the perimeter and the touchpad is powered by Synaptics. The touchpad is comfortable although it can be a trouble if you have oily fingers since it would easily get the oily stains on it. The touch is precise and has excellent precision.

The laptop has an HD camera which is pretty okay but I think the HP Omen 17 laptop has a better camera when it comes to the entire lot of all the VR ready laptops that we have. Nevertheless, the camera here is good but if you really want a top notch webcam then do check the HP Omen Review.

The audio quality in this laptop beats that in the HP Omen 17 laptop and I’m pretty sure that any audiophile would have the same feeling which I have when it comes to the amazing audio quality that this laptop has to offer.The Nahimic 2 specializes in 3D sound enhancement processing and audio improvements.

There is a sound tracking feature which helps the gamers realize with an on-screen indicator where the sound is originating from. The manufacturer has worked  a lot in providing the best audio quality for this laptop and enables gamers to experience the beast mode of this laptop while gaming.

This laptop has a GPU which will make any gamer drool- The NVIDIA GeForce GTX 1070, this VR ready GPU which would make gameplay a piece of cake when it comes to playing in the high and ultra settings.This laptop is VR ready which means that you could easily use your PC VR headsets (Rift or Vive) along with playing the game on high settings. The new Pascal architecture NVIDIA graphics card is the best you can get when it comes to a high-quality graphics gameplay.

The gameplay is way better than any other graphics card in competition except for the GTX 1080, but trust me if you have a laptop with the GTX 1070 then you are good to go with all the VR headsets that are out in the market now and play almost any game without any issue.

Gameplay is smooth with the G-sync incorporated along with the 120 Hz display refresh rate. The overall performance of this laptop is amazing. With the minimum of 256 GB SSD available, this laptop will be ready to run in beast mode. You can further expand the memory yourself or choose from various other memory and storage combinations that are available from the manufacturer directly.

One of the weak points of this laptop is going to be its battery life. The battery life on this laptop is pretty weak and it lasts for about 2-3 hours. This is relatively below average battery life, however, it is heavy and not that portable so having the charger plugged in all the time should not be a major issue.

The cooling system on this laptop is excellent and the laptop never gets overheated or the temperatures do not rise to an uncomfortable level. I really think the manufacturers have taken into consideration that this system will need some high-end cooling techniques and they have tried to  tackle the overheating issue tactfully. 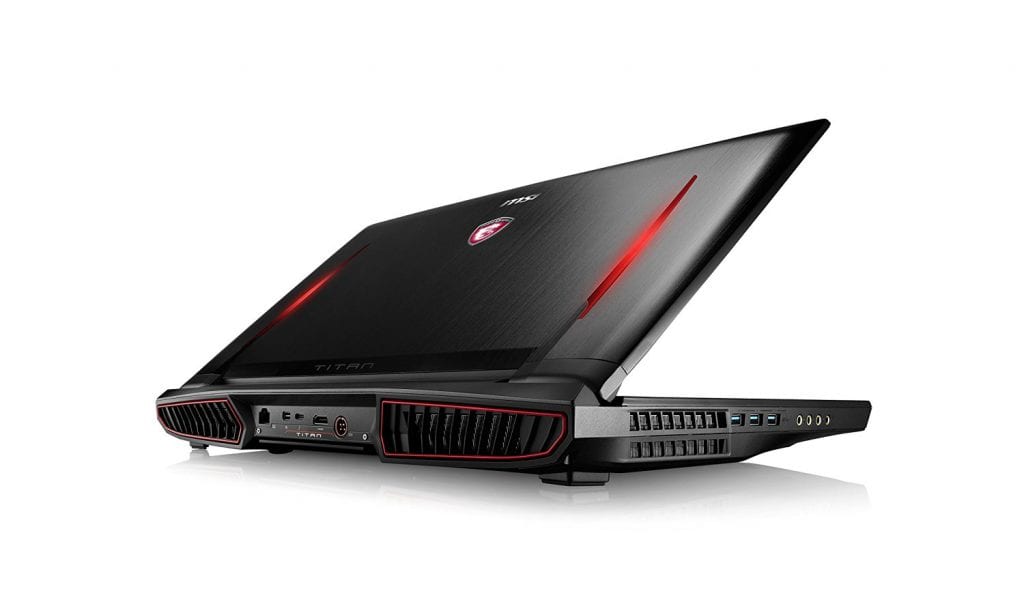 The laptop comes with 12 months warranty.

The MSI GT73VR is a VR ready laptop with an amazing display and G-sync feature. It is another laptop series which incorporates the Pascal architecture GPU and if you are looking for a laptop that would work great with your PC VR headsets then this laptop is something you should consider before making your final choice.

The only disappointing feature is the battery life and the weight of the laptop. It has a slightly below average battery life but that has to happen when you power up your laptop with so many high-end specs and make it this awesome. If you plan on not traveling with this laptop then this is the perfect selection for you. However, if you are troubled with the battery life and the bulky size then you can take a look at the HP Omen 17.

If you have any further questions, leave them in the comment section below and I would be happy to help. In the case, you liked the review then don’t forget to share it!