The last week has been quite eventful as the Minecraft is now ready for the VR experience on the Oculus Rift. The Minecraft was already available on the Gear VR and the Vive, however now it has made a new entry in the Rift headset world.The coming weeks will see Minecraft Windows 10 Edition and would be receiving the Oculus support.

There are new additions to the game which includes the amazing roller coaster map which could be downloaded by all the fans of the game.There have been updates that have been released and soon the fans could expect more improvements which would let them actually affect the rules of the game.

Well after months of releasing this game it has finally made it into the VR world for the Oculus so that now gamers would actually find enough games to be played on the rift after paying quite an amount of money for it. A few months ago Minecraft Pocket Edition was launched for the Gear VR and has been a hit among people even then. Now with the Oculus support, this game would be reaching a high-end quality of VR.

The Minecraft Windows 10 Edition Beta will be coming in a few weeks and it would be having the Oculus Rift support.Apart from Minecraft various other games have been making it to the Oculus and this soaring the competition between the rift and the Vive one of Oculus’s major competition.

Well this is a screenshot of the blog post which was posted by Mojang: 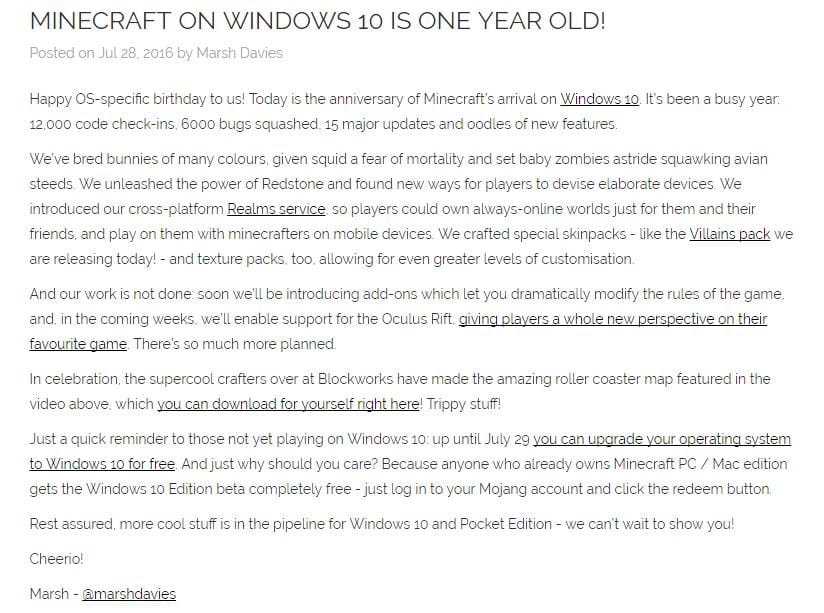