If you have an iPhone then there is a similar post which you can go ahead and check out on this website called Top 5 VR headsets for iPhone but for now let’s get started with the list of the best VR headsets that is available for Android phones out there.

The new Gear VR which was recently released alongside the Samsung Galaxy S8 is one of the top VR headsets in the list. The premium quality of the VR headset and the work by team Oculus definitely makes this VR headset one of the best that we have for smartphones.

Gear VR does have limited compatibility and that is one of the major reasons that not all of us are able to experience VR with this amazing VR headset. The 2017 version even comes with a remote controller and with the new release, there are a lot of new games that are coming to the Oculus Store.

The VR experience on the Gear VR cannot be compared to any of the VR headsets in the list and that makes the competition tougher for other VR headsets. The Gear VR has these amazing features where you can browse the internet in VR and the supporting software comes with a lot of great content which includes games and amazing experiences. Check out the Gear VR on amazon and let us know what you think about the VR headset.

=> Check out the new Gear VR with controller on Amazon

The newer version of the Homdio VR is pretty impressive and thoughtful. The new features and upgrades make this VR headset one of the best that you could possibly pair your android phones with. Although you might want to consider getting a Bluetooth controller to pair up with the headset for extensive gaming.

Looking into lighter gaming and experiences, the VR headset will work just fine. From the previous Homido VR headset, this Homido V2 has a better build quality and comfort. It has increased FOV and lens quality that will allow you to have better VR experiences.

The Homido V2 has gone better for good giving us more reasons to buy this VR headset. Although the VR headset can be relatively expensive than the other but it is worth the money. You can read the complete detailed analysis on the Homido V2 Virtual Reality headset and if you want to check out more features on the headset then do check out the link below. 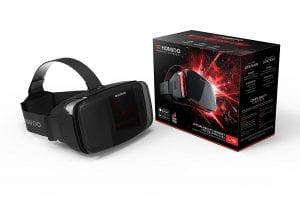 With a lot of complaints with the previous version of this VR headset, the Noon VR Plus is one of the other revamped VR headsets that has been introduced recently. The Noon VR plus comes with an additional remote feature which solves the problem of ‘not having enough content’ by allowing you to stream your PC on your phone enabling you to have a better VR experience.

The Noon VR headset is one of the premium VR headsets that you are looking at and has a great FOV and lens quality. The VR headset is compatible with most of the phones having the screen sizes ranging between 4.7-6inches.

The Noon VR comes with an eye tracking software and that helps you play most of the games just by using that software. It is really impressive how Noon VR has taken the initiative to improve the older VR headset and add features solving its old problems. You can check out the complete review of the Noon VR plus before making a purchase or if you are interested in the VR headset then do check it out on Amazon.

The headset material is unique and you would even like its catchy purple color. There are people who find the color off-putting but to me, it looks really exotic.

I recommend buying the Merge VR from the official site would get you a 30-day guarantee and a one year warranty as well so go ahead and check out the Merge VR.

=>Check out the Freefly VR on Amazon

If you have any recommendations and opinions, leave them in the comment section below!

You can even let us know which is your favorite VR headset among the 5 in the comment section and don’t forget to share the post with your friends on social media.