This VR headset is a Chinese one and the VR Box 2.0 review would further reveal the advantages and setbacks that comes with the VR headset. The VR Box 2.0 headset has been one of the highest selling products and a cheap escape to Virtual Reality. This product has been hyped on Amazon, so it was necessary that you have a detailed VR Box 2.0 review to understand if the product is worth the money or not! 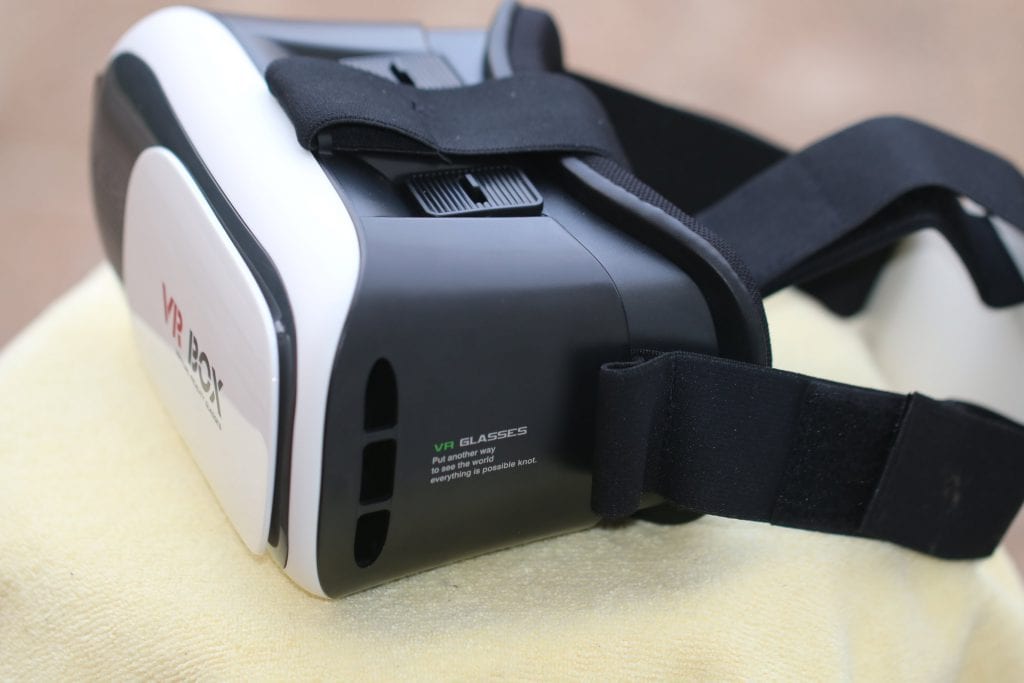 To be honest I’m not a big fan of the lower end headsets because not many of them prove to be good enough. Apart from that, they do not have a good way of letting you into the VR world and might prove as an upgrade to the Google Cardboard.I have a few of them that I like though there is one thing to be admitted, once you have used the Oculus Rift or the Vive then anything in front of it would look like peanuts.

However comparing the mobile powered VR headsets with the ones that are designed for the PC games is a little mean.But the addictive resolution! Coming back to the review lets get started! 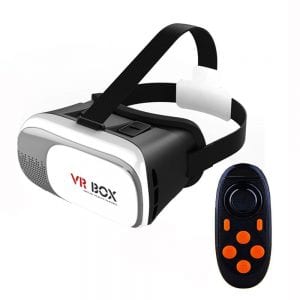 1. Well, it does have a slot where you put in your phone like any other VR headset and the panel does come off like a part of it so that the camera is exposed and it could be used for augmented reality.

2. Does have sliders making the adjustment of the lenses easier and hence enabling a better view.

3. Not too heavy, most of the weight comes from the phone and there are enough straps that could be used for distributing weight.You would feel the weight only when the straps are not adjusted properly so I recommend that the strap adjustment is done well.

4. However, it does have a tray in which you put in the phone and it does well with any phone up to 5.7 inches anything above that you would want to rethink getting this product.

5. Well, it does come with a Nintendo Wii type of controller(to look) but I think using a gamepad would serve much better, however, the immersive experience and it mostly depends on the phone and the resolution of the phone and the focus as well.

6. There is a toggle switch for both the iOS and android and hence making the settings jazz a little easier on the remote given. 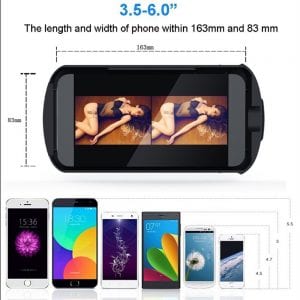 1. You constantly need to remove your phone in order to open your app and launch a game so the manufacturers do need to seek out the navigation issues. Even with the remote, the game does get stuck and hence is a bit annoying.

2. There is a feeling of nausea and you could feel a little dizzy after a while and hence would not recommend it for long time use.However, I always feel this problem could be solved once you get used to it provided it isn’t happening due to your selective fears to something.

3. Switching between two open apps becomes a pain since you would constantly need to remove your phone and keep changing the apps.

4. Setting up the remote was also a pain for me. I could easily do that with a gamepad that I generally use.

There is a lot of content for the VR Box 2.0 since you can use most of the Google Cardboard games and apps when paired with the controller. However, because of the mediocre quality of the VR headset, I never really enjoyed any of the content and it was something which I bought, tested, packed and sent it back.

I found it difficult to focus the lenses and obtain an image that would really help me see the VR world but sadly that did not happen. I still wonder if it was just my VR headset or even others faced similar issues. There is no looking back since I would really not recommend this product if you want a smooth VR experience.

The final outcome of the VR Box 2.0 review is that it is a Bleh product for me! I found this product having so many issues that trust me I had to reduce the number of points on ‘what I liked about it’. It was too frustrating that I had to always remove the phone while changing the apps. If you are okay with all the additional drama that tags along this VR headset or if you know that this is just an experimental investment then this VR headset can be worth it else not!

There is no point in having a VR headset if it isn’t immersive and you need to keep removing the phone every time you want to change the app. If you are not convinced then go ahead and check out the Amazon reviews on the VR headset.

From the detailed VR Box 2.0 review, it is clear that the product is not as good as you might want it to be. The VR headset that I received showed double images and I’m not sure if it was the case with just my product or everyone had got such a crappy product.

In the case you want to have an immersive experience, I would recommend the Samsung Gear VR or the Merge VR.If you really want to go cheap then the Google Cardboard or the Xiaomi VR headset are good for beginners in VR who just want to know how the entire VR experience looks like!

Merge VR is priced at $59.99 which is double the price of this VR headset but it is definitely worth the experience. The experience is way much better in Merge VR, Freefly VR or the Gear VR as compared to the VR Box 2.0. It isn’t difficult to understand that the headset is pretty annoying especially when you are having a bad experience with its quality and are unable to watch even one 360-video in VR!

Try to invest in one of the premium VR headsets as mentioned above, till then the Google Cardboard will work just fine for you if you are trying to get a taste of VR. There are other lower end VR headsets like Xiaomi VR headset which would bring VR to you at a really low price and is not as disappointing as the VR Box 2.0.

In the case, you have any other comments or experiences to share then leave them in the comment section below!

Did it help you understand the in and outs of the VR Box 2.0?

Let me know in the comments!