Mattel creations have been a famous name in the toy industry for kids and has been ever growing since the time it has been set up. The Mattel View-Master VR Viewer is yet another creation for the kids which has been specialized for virtual and augmented reality. The only good thing is this VR headset is that it best suits the kids and it is a better alternative to Google Cardboard as it is a more sturdy and is made out of good quality plastic so it would definitely last longer than Google Cardboard (especially in the case of kids).

I found this while searching for another alternative for the Google Cardboard and I like the fact that Mattel did invest some thought in creating a VR headset for kids as well where in you do introduce them to the new concept of VR and technology.

All about the View-Master VR

What I do not like about the View-Master VR

Are VR headsets safe for kids?

As mentioned by the manufacturer, the VR headsets can be used by kids above the age of 7 and they have sought the advice of an ophthalmologist to ensure that the VR headset is optically safe for kids.

After a little bit of reading up on this issue, I have figured out that there are no specific health issues that kids will have using this headset, the effect it has is similar to the effect any other VR headset might have on an adult.

In the case of any further doubts, it is better than you consult your doctor before using the headset with your kids.

Benefits of the View-Master VR

You can download all these apps in the View-Master VR .These apps do provide kids with educational value and it is really a good option for all the parents who are interested in making learning much more interesting for kids.

The VR experience with all these apps is something unique on this headset and it really makes the headset kid- friendly.So if you were worried that your kid would end up just playing games on the headset then you need to consider the educational value that the VR headset has to offer through these informative and interesting apps that have been included by the manufacturers.

Mattel View-Master VR is a good buy  if you want to give it to your kid and introduce him to the VR world, I do like the fact that it is easy to use and compatible with phones between the sizes 4.7 to 6 inch and it does come with an adapter for the iPhones and hence making it usable with both iOS and Android.

It isn’t as good as the high-end products but definitely, is another alternative for google cardboard and I like the fact that you can  use it along with your kids allowing you to interact with them. Well, you can check the reviews of other Google Cardboard like VR headsets. 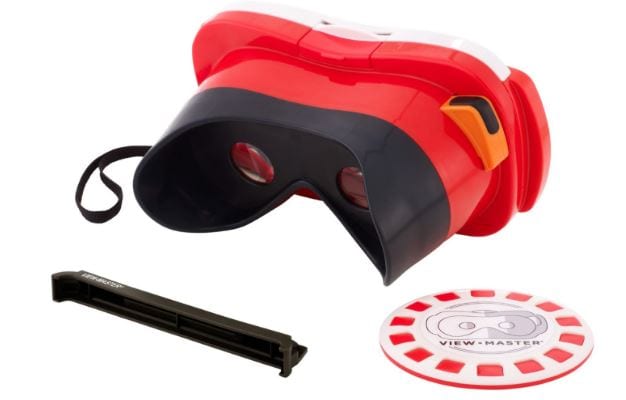 => Click here to Check the Mattel View Master on Amazon