VR Kix headset has been doing relatively good with the audience when it comes to the smartphone VR headset section. I was amazed at how well this VR headset works for the price range, although there were a few setbacks. This VR headset has been in talks for a while so let us look at its specs and features in a bit more detail and decide if it is worth a buy or not.

1. The VR headset is very comfortable and has a nice three-way strap which can be readjusted. It has cushioning which helps the headset sit on your face perfectly and there is no way you would feel irritated with the headset or feel the need to readjust the headset every few seconds while gaming.

2. The phone is inserted in the slot provided in the front of the VR headset which is visible once you remove the cover. The spring-loaded arms hold the phone firmly and phones with screen sizes ranging between 3-6 inches . 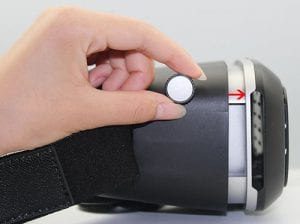 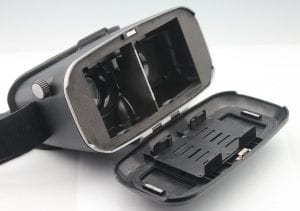 4. It is both Android and iPhone compatible so no matter what phone you own, this VR headset is compatible with almost every phone. You can even check your phone compatibility here.

5. You have a number of other app options to select from. Like the Noon VR, it has the head tracking system, so you need to just stare at a particular to select it. You even have the option to buy an additional controller that can go with the VR headset which would be a wise idea. There are a couple of Bluetooth controller options we have that you could go through!

6. It has dedicated slots for your phone headphones and the charger. Since the VR headset does not come with a speaker of its own, it is pretty good if you use your own headphones for good audio quality.

8. The headset is light in weight so you would not feel like any unusual weight on your face. It is relatively lighter than other VR headsets as well.

1. The overheating issue was something pretty usual in this VR headset. However, I use cooling pads in order to extend the gaming on these VR Headsets and till now they have been very handy. There are a few methods to solve the overheating issue in mobile phones while using it in the headset.

2. You do have few apps and games, but it can get a little annoying to find out which one works and which one does not with this VR headset. You have a few options but the content is not that great or unique.

3. The field of view isn’t better than the Gear VR. Looking at both the VR headsets, you can be pretty sure that the Gear VR is a better deal but the only requirement is that you need to own a Gear VR compatible phone.

4. The price seems a little bit too much for the quality of VR headset provided. I think you would get better deals with the Gear VR. The only advantage this VR headset has over the Gear VR is the compatibility with all phones.

5. Comparing it with the premium quality of the Gear VR, this VR headset does lag behind in quality. If you do not have a Gear VR compatible phone then this VR headset could be something you might consider.

If you really want to have a premium quality gaming experience then I would suggest you to rather look into the Merge VR, Gear VR or the Freefly VR. If you cannot fit these in your budget, then this VR headset should come on the top of your list.

The games and apps on this headset are going to be pretty limited, especially when compared to the premium level headsets like the Merge VR or the Gear VR. Even if you do not have a Samsung Compatible phone, you could go for the Merge VR which is pretty good enough.

I would suggest you buy this VR headset only if you have a budget that really goes well with the price of this VR headset. It is for people who are getting started with Virtual Reality and are not looking for anything which comes under premium quality.

Well, this was my take on the VR Kix headset. In the case you have any further questions then leave them in the comment section below.

Have any experiences with this VR headset? Then write them down in the comment section and share it with all of us 🙂