HTC Vive Cosmos and HTC Vive Pro is a battle between two improved headsets. HTC has been in competition with other brands when it comes to VR headsets. This time, we will compare two HTC headsets in this battle of the Vives.

The HTC Vive Cosmos and HTC Vive Pro are close to each other in terms of price. The Vive Cosmos is $699 while the Vive Pro is sold around $700 excluding its accessories.

These two headsets give you the best immersive experience in virtual reality. They are both PC-powered and are totally in the game.

The Vive Cosmos has an approach to the masses as its features lean towards a more average user.

The Vive Pro, as the name suggests, has been developed for professional users. It is basically a headset that needs little to no improvements- it is the end game.

The Vive Pro may sound like a winner here already but do not sleep on the Vive Cosmos as it also has features that can make you go “wow”.

When it comes to the headset alone, The Vive Cosmos and the Vive Pro have HTC’s halo mounting system. They have a halo band that wraps around your head that can be adjusted for a better fit.

The stabilization in both of these headsets is impressive, and they have been designed in a way that you get an even weight distribution while you wear the headset.

HTC has also improved the comfort on the Vive Pro by putting a cushion on both the faceplate and around the head strap. Both of the headsets also come with built-in on-ear headphones that produce excellent sound quality.

You do not need an external headphone as they both have fantastic audio quality. Both headphones are adjustable and have a volume toggle on the left earcup.

They are also able to produce a 3D spatial audio, which will be necessary as more and more software companies are developing their games with a 3D sound.

These headphones are perfect for both the Vive Cosmos and the Vive Pro because you might find it hard to put another headphone on top of an already large headset. 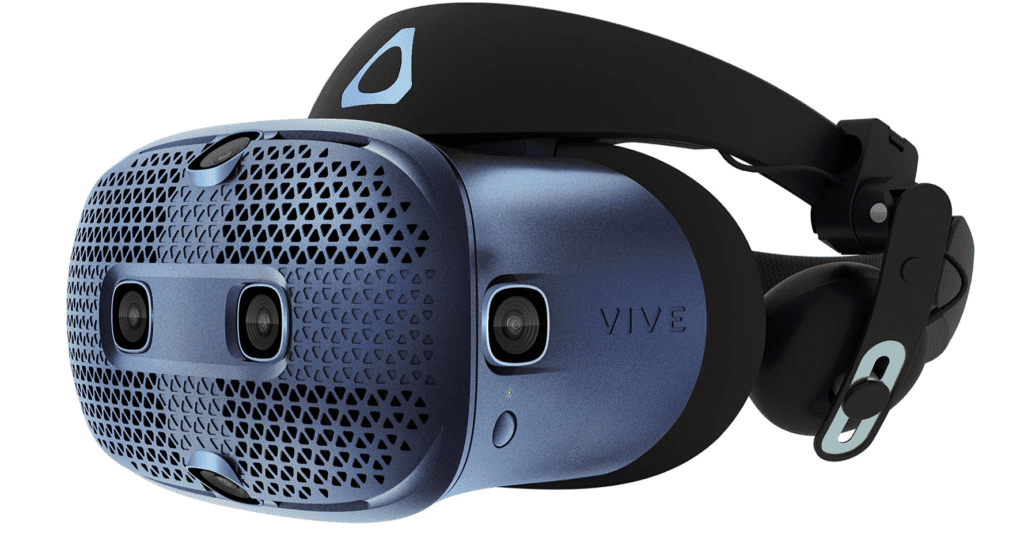 The Vive Pro still needs a cord to connect to your PC, the Vive Cosmos, on the other hand, uses the new Intel WiGig technology that requires no cable connection.

It transmits audio and video at a fantastic 60GHz and lets you play your games smoothly. However, the Vive Pro has added its wireless feature as well. To get this feature, you have to purchase an external kit.

The Vive Pro has a more comfortable head strap than the Vive Cosmos, so you can play games for a more extended period without feeling uncomfortable.

But when it comes to the wires, the Vive Cosmos is better as it does not require any wires to connect to your PC. So unless you have purchased the kit for Vive Pro, you are prone to be distracted by the wires on the headset.

The Vive Pro and the Vive Cosmos are one of the best headsets in the game when it comes to screen display.

The pixels on both headsets are so dense that you would notice little to no screen-door effect. This is a plus when it comes to gaming, as you are less likely to be distracted.

Because of the pixel density in both of these headsets, you get a more immersive experience inside your virtual reality world. The Vive Pro has 1440 by 1600 pixels on each eye. The resolution uses an AMOLED display that gives off a more vivid color.

The Vive Cosmos also uses a 3.4 inch RGB LCD that gives off more vibrant colors in each panel.

Both headsets also block the view from the outside world with the faceplate completely enclosing your eyes to let you focus on your game.

However, if you want to be more aware of your outside surroundings, the Vive Cosmos offers an easy solution. It has a feature where you can flip the screen on your forehead and act like the visor on a motorcycle helmet.

I think the Vive Cosmos wins on this one as it offers a slightly better resolution. It also uses a more advanced RGB LCD, which is better in terms of color display.

It is also better when it comes to the screen, as it can be flipped up to make you more aware of your surroundings.

In this category, we will discuss the headset’s smoothness when it comes to transitions. The refresh rate focuses on how many times the system refreshes itself in a second.

While the Field of View talks about how wide you can see the game in terms of angle. Let us talk about the refresh rates first. The Vive Cosmos and the Vive Pro both have a refresh rate of 90 refreshes per second or 90Hz refresh rate.

This is pretty standard for the headsets that are in the market. A 90Hz refresh rate allows you to play games smoothly with fast transitions.

This lowers the possibility of experiencing motion sickness and nausea. Field of View is what the headset offers in terms of how wide you can see in the game.

If you have a wider field of view, you have the advantage of seeing more of the surroundings of the game. It allows you to concentrate on a specific task while also making you aware of what might creep on the side of the display.

The Vive Cosmos and the Vive Pro both have a 110 degrees field of view. This means that you can play at a very high quality.

You can do tasks at the center of the display and you will not be easily crept up from the angles that you would not usually see on headsets with a narrower field of view.

Both headsets have the same Refresh rate and field of view so there is no comparison of the two.

These are important aspects of a headset so you might want to consider looking at these features when buying any VR headset in the market.

The Vive Cosmos has adopted the more advanced Oculus Touch control. It has not totally ditched the Vive remote or Index controller as it is still compatible with both.

It has 6 degrees of freedom, which is tracked by six mounted cameras around the headset.

Because of the Vive Cosmos’ inside-out tracking, it allows you to play games with freedom even in a small room.

The 6 degrees of freedom means that you have a wide range of motion that the headset can detect.

You can put your hands on the side of your head and it can still track it well.

However, putting your hands behind your back gives the headset a hard time when it comes to tracking the controllers.

The controllers also have haptic feedback, gaming buttons, and triggers for a more immersive gaming experience.

The Vive Cosmos has two knuckles, handheld controllers. Both controllers light up for the detection of the mounted cameras on the headset.

The light feature is optimal when using the controllers in a dark room as it still allows the 6 cameras to track it with precision. This means that because it uses light for tracking, it also uses a lot of energy. The controllers require two AA batteries each.

The 360 degrees tracking of the Vive Pro is from its externally mounted trackers. It has an externally placed sensor for more precise tracking. The Vive Pro, since it is designed for enterprise applications rather than games, has a different controller.

It features two controllers with a multifunction trackpad. It has less haptic feedback than that of the Vive Cosmos and lesser buttons designed for gaming.

You really cannot compare the controllers between these two headsets as they are used for different purposes. However, when it comes to precision, you can rely on the Vive Pro to give you a more precise tracking.

It also uses a lot more room so you can move freely inside the trackers and not have to worry about the controllers not being tracked. I think this is the biggest difference between the two.

Gaming on the Two Headsets

As mentioned above, the Vive Cosmos has a better feel in the gaming arena. It includes joysticks, buttons, triggers, and haptic feedback for gaming.

The feedback has become more essential in the gaming industry as it gives you more than the display on the screen.

You can feel the bumps in racing games when your car has been hit, and other movements in other games. These include punches, kicks, and even bullet hits.

The Vive Pro has a more professional approach to virtual reality. It is more applicable in virtual reality games where you need to build houses and other infrastructures.

The Vive Pro is often used in enterprise applications such as the apps related to architecture.

The Vive Cosmos and Vive Pro are two of HTCs best headsets in the market. The comfort is exceptional on these two as you can wear them for a long time.

Although, the Vive Pro has an edge on this because it has a better cushioning that protects your face up to the back of your head.

You cannot really compare the two with one application as one is better than the other.

It just depends on the type of application that you present to them. The Vive Cosmos is more optimal in gaming and having to move your hands a lot for attacking your opponents as well as defending yourself.

The Vive Pro, on the other hand, is more applicable to apps that require precise movements for building with details.

The Vive Pro uses more room as it uses external trackers while the Vive Cosmos has mounted cameras that allow you to play in a small room.

So depending on the scale of your room, you can choose between these two. When it comes to the price of the headsets, the Vive Cosmos is sold at $699 which is cheaper by $100.

The Vive Pro headset at $799 is really not that expensive compared to the Vive Cosmos. The Vive Pro has amazing features that you can access when buying the extra packages that HTC offers.

So I guess when you have all the other external packages already, then you can buy the high-end Vive Pro for an upgrade. However, if you just want a VR headset that needs less external devices, then the Vive Cosmos is for you.

It is really up to you to decide which VR headset suits you. But these two headsets give you a lot of features that you might want to consider- be it for work or for leisure.

Let us know which headset is your favourtie in teh comments below!