This holiday season might be one of the best times for the VR market to boom. Virtual Reality has all its players out in the market which includes the major VR headset giants, Oculus Rift, HTC Vive and Sony PlayStation VR. We do have a couple more interesting VR headsets that are coming up and one among them is the Razer OSVR (consumer version is releasing soon).

Apart from the different VR headsets available, we need a laptop which has the right specifications in order to support the VR headset. Both the Rift and the Vive need at least the NVIDIA GeForce GTX 970 and 8 GB RAM in order to support gameplay in Virtual Reality without tearing or any kind of inconvenient lag during the gameplay.

NVIDIA came out with its new series of graphics card keeping in account the requirements of the VR headsets and here are a few early adopters of these Pascal Architecture graphics card which make the laptop GPU work more efficiently with low power consumption.

Let’s look at the top 5 VR Ready laptops that one could possibly go for in this holiday season:

Origin PC is one of the best gaming laptop companies and their gaming laptops are the best in terms of hardware and overall efficient working of the laptops.This laptop has an amazing display and you can choose from the 1080 HD or the 4K resolution. The laptop is packed with the GTX 1070 graphics card which improves the gameplay at 4K resolution, so if you are really into the display then this laptop has everything you need for a perfect gameplay.

If you want to save some money, then you can go for the 1080 HD resolution which is still good and with the G-sync feature, this laptop is not going to trouble you with tearing and input lag problems. Having said that, let’s look at the battery life- The battery lasts for about 3 hours on this laptop and in case it is under full load which includes maximum resolution and high settings it may last up to an hour and a half.

The laptop is heavy, it weighs around 5 kgs and you may have to think twice before you travel with it because it isn’t a gaming on the go type. Apart from ruining traveling plans, this laptop is amazing to use with your VR headsets and that keeps it on the top of the list. 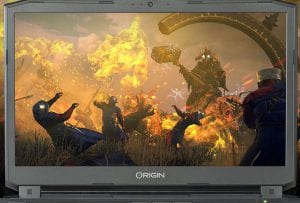 The Alienware series by Dell is one of the most sought-after gaming laptops. They have great battery life along with other features and customization options. The gameplay is excellent on this beast and they are one of the early adopters of the new NVIDIA GeForce GTX 1080.

You have display options of 1080 HD display with 300 nits and another display option which is the 4K resolution having around 400 nits. You can buy the required display depending on the green in your wallet. I think both the displays are good, the 1080 HD resolution works great but if you really want to step it up a notch then you can go for the 4K resolution.

The Alienware laptops have an option of NVIDIA GeForce GTX 1060, 1070 and 1080. The GTX 1060 works fine with the VR headset but if you want to go ahead with gaming on the 4K resolution display, then it is preferable to use the higher versions of the GPU’s. The laptop is thinner unlike the previous versions and is slightly lighter. The 17-inch laptop can be a little larger when it comes to the length of the laptop but even then that is okay as it gives better gameplay and a monitor feel while gaming. 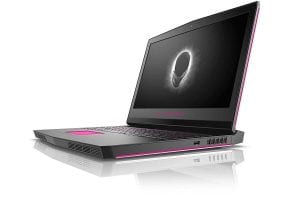 The Titan laptop comes with the two display option again which coupled with the G-Sync feature to avoid any screen tearing. The display on these laptops is gorgeous even though they aren’t as good as the laptops mentioned above. The NVIDIA graphics card on this laptop is the GTX 1070 and GTX 1080.

The battery is pretty much average and you have many storage combinations to choose from. The laptop has more ports than you might need which is something very typical of the MSI laptop company. I think this laptop is a total beast and you should check it out if you want to give VR Ready gaming laptop a try. 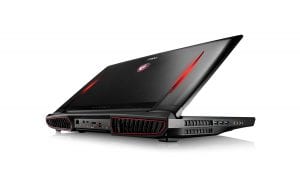 This member was least expected on the list but since it is one of the other VR ready laptops which has not been disappointing it deserves a place on the list because of the amazing display. The laptop design in itself is not that unique or rugged unlike the other gaming laptops, it is more soft and subtle.

The laptop is powered with the GTX 1070 Pascal Architecture GPU and the laptop is relatively lighter than all the other newly  GPU improved VR- ready laptops. The previous Omen series laptops were average in comparison to its competitors but look like the tables have turned for this new model.

The battery life is average but if you want a lightweight VR ready laptop then this is a perfect choice. The best feature on this laptop is the display, weight, and even the battery life which even though might be average, it is relatively better than other laptops. 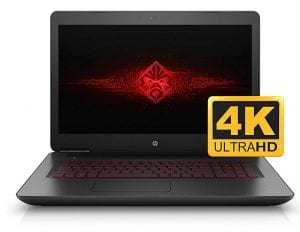 This laptop is the most expensive one on the list. Well, it deserves to be priced high because it has all the latest features along with a unique design. This Razer gaming laptop comes with the NVIDIA GeForce GTX 1080 GPU which is a powerhouse for gaming.

The display is amazing along with the keyboard design which is one of a kind. The laptop is super thin and travel-friendly since it weighs around 3.5 kgs. Yes, this is really light for a gaming laptop of this prowess.

The laptop includes a unique touchpad placement along with the volume scroll and the led lights and design make it look really cool. I think if the price dropped down even a bit, this laptop would be a steal. From amazing display to the awesome storage and powerful GPU, this laptop is one of the best (although expensive) VR ready laptops. 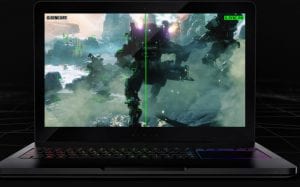 Want to see a few more VR ready laptops with a lower price tag? Tune in here with us!