Virtual reality is surely taking over these days and it has been the perfect way to spend leisure time. The Oculus Quest 2 and Vive Pro are both amazing and here, we will talk about them.

Oculus is a VR company that builds some of the best VR headsets in the market. It is a company owned and operated by Facebook so the overall quality of the headsets is great.

You can be sure that with a large company like Facebook, they can hire the best engineers and crew in order to create their headsets and so, the Quest 2 headset should be one of the best.

HTC is not as well-known as Facebook but it is one of the companies that are highly-respected in the VR industry. It has been producing headsets that are very popular because of its quality.

Vive Pro is another headset from HTC that was meant to be an upgraded version of the previous Vive headset. It does not seem like a sequel but rather an improved Vive.

This means that the company has put the best features that the engineers found in years of studying the original VR headsets. So you should expect nothing less than a great headset.

With that said, there are things that you need to know and consider before you can even start to think about buying a VR headset. You have a lot of options so you really need to be vigilant.

These two are both upgrades so you also need to see what makes them similar and different from each other. That way, you will have a better idea of what you really want in a VR headset.

So read on as we try and dissect the said features, similarities, and differences between the Oculus Quest 2 and HTC Vive Pro for you to decide which one you should purchase.

The first thing that you should consider before buying a VR headset is if you have the right setup for the headset. That is because you have to choose between two types of headsets.

The first type of headset is called standalone which is pretty self-explanatory. It is a headset that does not need to be connected to anything in order for it to work and function properly.

The other type is called tethered headset and they need something else to power their systems. These types of headsets are usually connected to a PC setup in order to get enough power.

So when you choose to buy a tethered headset, you need to know if your PC setup has the required specs for the headset. The headset will be pretty much useless if the PC can’t power it.

The HTC Vive Pro is a tethered headset that has one of the highest requirements of any headset in the market right now. So if you choose this headset, prepare to upgrade your PC.

It requires a high-end Windows PC with at least GeForce GTX 970 as a video card. However, this was the requirement for the first Vive headset so it lags with the newer Vive Pro.

That is why you need a video card that is more powerful than that. The Oculus Quest 2 is a type of hybrid headset that can be connected to a PC or just used as a standalone headset. 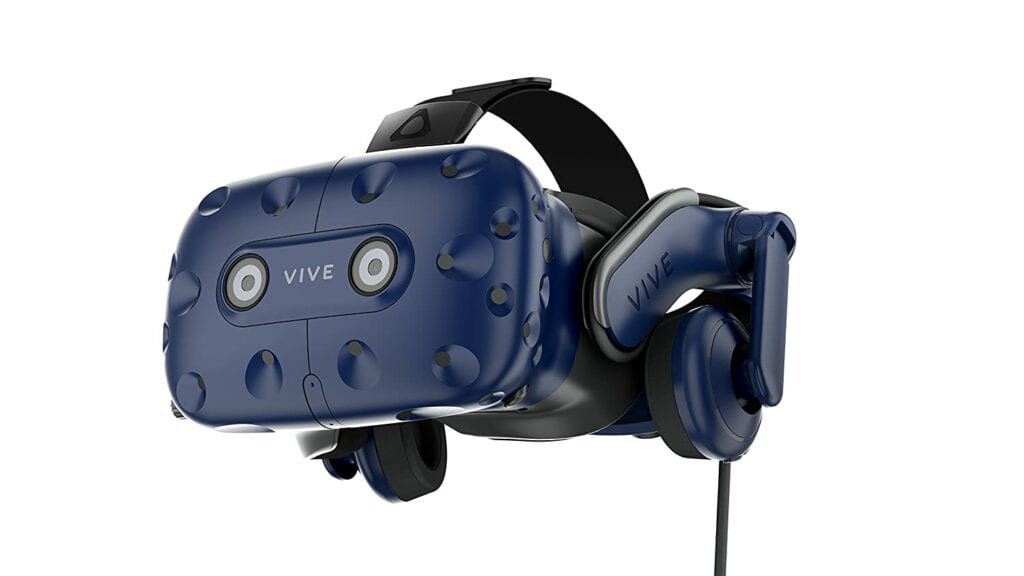 The PC setup needs the same video card (GeForce GTX 970) or higher for the tethered option of the Quest 2 headset. This was not a lie as it did function smoothly with that video card.

The cable is included when you purchase the headset so you do not need to buy it separately. Switch easily to a tethered or standalone headset whenever you want with the Oculus Quest 2.

The best way to test if the headset is good is to see the display, of course. This will determine whether the headset can portray colors and movements perfectly on the lenses.

There are many ways to see the display itself and one thing where you can see the ability of the display to put up images is to see what the lenses are and see what they can really do.

The Vive Pro is one of the best headsets when it comes to the display. It has lenses made out of AMOLED which is one of the materials that is able to display the most vivid colors.

With a little bit of screen door effect, the AMOLED lenses of the Vive Pro are nothing short of amazing. The colors are crisp and the surrounding is always vibrant and lively.

This means that the headset might have a little dizzying effect on the screen but if you focus on the details, you will hardly notice the small gaps in between the pixels of the lenses.

As for the Oculus Quest 2, it uses a pretty basic LCD screen. However, Oculus did not back down as they upgraded the screen with striped RGB instead of relying on the pixels.

The screen also uses a single-panel and fast-switching display which makes it one of the smoothest displays on the market. It is able to portray transitions and color switches in detail.

Oculus also layered the RGB stripes on the lenses so they perfectly combine colors that some VR headsets are not able to portray, making the virtual reality world as realistic as possible.

Resolution is all about the density of pixels on the screen. This means that the more the pixels are, the better the images will be in terms of details and precise designs on the screen.

Vive Pro is a headset that is considered good but not the best when it comes to resolution. It has a screen resolution of 1440 by 1600 on each lens which is about average resolution.

This resolution is still impressive, do not get me wrong, however, it can be improved. With this kind of resolution, you will still be able to focus your sight up to 10 feet away within the display.

When it comes to high-end games that are detailed in the best way possible, the Vive Pro headset will still be able to portray the images with precision and great color combinations.

As for Oculus Quest 2, it has one of the most impressive resolutions on the market. This headset has 1920 by 1832 pixels on each lens which means that it is very dense in pixels.

This headset is able to display games, videos, and other content with details that you will hardly find in other headsets. This means that it does not have problems with games with high details.

Combine that with the stripe RGB and you are surely going to get images with crisp colors and smooth edges. With this resolution, you will hardly see any screen door effect on the display.

This type of detail is great for gamers since you will be able to look at the details of the graphics and concentrate on the most important things. This is also great for industrial work.

For example, you are working on designing and graphics, you will be able to be as detailed as possible with your work. So the Oculus Quest 2 takes over this category in the post.

The refresh rate is one of the most important features that you need to observe in a VR headset. It is the one that will determine how smooth the display and movements will be.

The Oculus Quest 2 is one of the headsets that boast an amazing display but is pretty mediocre when it comes to the refresh rate. This headset has a refresh rate of only 72Hz, pretty low if you ask me.

This refresh rate, despite being low, can still put up smooth displays. It is able to move with fewer glitches or lags so there really is nothing to worry about this low refresh rate.

The Vive Pro takes over in this category as it has a 90Hz refresh rate. This is higher but it is still not impressive. It is the average of refresh rates so it can still be improved in the future.

While these two headsets might be different when it comes to the refresh rate, they actually function almost the same as they complement their resolutions perfectly for a smooth display.

The Vive Pro has a lower resolution but it has a higher refresh rate than the Oculus Quest 2 so it is still able to put up displays that are smooth and are surprisingly detailed.

The Oculus Quest 2 might have a lower refresh rate but it uses the extra power for the resolution which means that it displays clearer images at a reasonable pace and speed.

This usually happens with other headsets as well because the resolution and the refresh rate usually compete against each other. The energy is distributed to both to create a realistic display.

We have talked about most of the features of the Vive Pro but the Oculus Quest 2 has other features within the head-mounted display that needs to be talked about to get the most details.

Since the Oculus Quest 2 can be changed to a standalone headset, it has its own processors and memories inside the headset. These are also upgraded from the past version of the headset.

The Oculus Quest 2 has a Snapdragon XR2 processor which is also pretty average. However, for the price of the headset, this kind of processor is pretty powerful and can run most games.

It also has an upgraded 6GB RAM which means that you can now play and open other windows within the headset without actually lagging. It can handle more tasks at the same time.

You can now also put more content on the headset. With the improved memory of 128 GB, you can store more games and videos, you can also upgrade the memory up to 256 GB.

==> Get the Best Deals on HTC Vive Pro

Vive Pro is perhaps the best when it comes to offering comfort when playing video games. It has a halo strap that can be adjusted and padded all the way around the head.

You can adjust the head-mounted display with both the halo strap and the over-the-head strap. The halo strap can easily be adjusted with the help of the dial at the back of the head.

Oculus Quest 2 is a bit lighter than the Vive Pro so you do not have to worry about the weight that much. It has the same standard halo and over-the-head straps for adjusting to your comfort.

The controllers of these headsets did not change much compared to their predecessors so no need to worry about those. Just remember the details on this post and what you will need.

There is no need to hurry and buy the headset. Make sure that you are able to attain all the requirements and space for you to use the headset that you choose to play with.

==> Get the Best Deals on Oculus Quest 2

The Oculus Quest 2 is a great upgrade and is a cheap option. Plus it features a lot of options to play with as you can either connect it to your PC or have free-range gaming with its standalone option.

The Vive Pro is a bit more expensive than the Oculus Quest 2 but it has a fast operating system. So it is all about personal preferences when it comes to choosing the VR headset.

So go ahead and see between the two which is the best headset for you and then get it now!