Oculus Quest and the Gear VR are the two headsets that are wireless, where one is a standalone headset while the other one is powered by a smartphone.

Oculus Quest is a new release and it was just released in the last month and it has taken the VR world by storm as it is the only standalone headset that gives you a VR experience which is very similar to that of the Oculus Rift which by the way has been upgraded to Oculus Rift S.

There are a lot of differences between the two headsets and you can even see some price difference between them.

The Quest is four times the price of the Gear VR but considering that you need to own a Galaxy phone in order to run the Gear VR, the cost for the Quest might seem a little justified.

So without wasting any more time let’s compare these two headsets and see which one is a better investment than the other.

Both the headsets have an amazing design and the weight of the headsets are pretty much similar. To be precise, the Oculus Quest is slightly heavier than the Gear VR.

The Oculus Quest is a headset where you get some equal weight distribution which makes it really easy to wear for longer gaming periods.

The headset is extremely comfortable to wear that way and you can go on wearing it for longer periods of time.

The same goes with the Gear VR as well but weight is not an issue that stops you from wearing this headset for long gameplays but it is the overheating issue.

The Galaxy phones that powers the Gear VR are the only ones that are compatible so if you do not have a Gear VR compatible phone then you are not left with much choice.

While the Oculus Quest is powered by the microprocessor inside the headset and it does not need any PC or phone to power it.

This makes the Oculus Quest a better option as you do not need to own a Galaxy phone in order to be able to use the headset like in the case of Gear VR.

Coming back to the comfort of the headsets, needless to say, both the headsets are amazing to wear but the Oculus Quest is more comfortable as you do not have to deal with the overheating issue as in the case of the Gear VR.

The display on the Oculus Quest is pretty amazing with very little screen door effect in comparison to the Gear VR and even the other headsets like the older version of Oculus Rift.

The Quest has a screen resolution of 1,440 by 1,600 pixels per eye which is more than the Rift S or any other VR headset.

The Gear VR has a resolution of 1080 x 1080 pixels which means lower pixel density resulting in less clarity. This means the experience is not going to be as immersive as it would be in the case of the Oculus Quest.

Hands down, the Oculus Quest has a better resolution giving you a much more immersive experience than the Gear VR.

The Oculus Quest comes with controllers that are pretty similar to the ones that you get with the Rift and very comfortable to use during gameplay.

Since the  Oculus Quest is a standalone headset with sensors on the headset which helps it in tracking movements of the controllers.

The feel of the controllers is pretty amazing as they fit your palms like gloves. It gets easier to reach all the buttons on the controller making it easier to operate while gaming with the headset on.

The controllers that come with this headset give you really interactive gameplay unlike the remote that you get with the Gear VR. 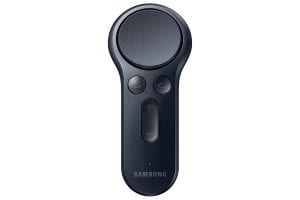 The Gear VR comes with a basic remote using which you can point and select options inside the Oculus platform. It is basic and comes in handy but overall, the gameplay is more interactive in the Quest with the 6DoF.

It is worth noting that Oculus Quest as a standalone headset comes with battery life while the Vive is connected to a PC and hence you do not have any battery in this case.

The Gear VR, on the other hand, runs with the Gear VR, hence make sure that you have your Gear VR charged before you get started with gaming.

Also, it would be nice to use a cooling pad against the back of your phone so that you can avoid overheating and this would interrupt your gameplay if the phone heats up a lot.

The newest version of the Gear VR has improved the overheating situation yet it would be nice to be careful about it while you indulge yourself in some VR gameplay.

The Gear VR comes with quite a few games on the Oculus Platform but since the degrees of freedom is very limited on the headset, hence are the games.

You are going to have the same Oculus Platform for both the headsets but the number of games is going to be more for the Oculus Quest.

You are going to have the newly released games for the headset and on top of it, Oculus has said that almost every game on the Rift S is going to have its own playable version with the Quest.

This means that you have so many games to play on the Quest. Both the headsets have a lot of cool games and you need to check out the Oculus Store website to know more.

The Oculus Quest is expensive in comparison to the Gear VR but considering the investment you have to make on a Gear VR compatible phone, it is still lower in price.

So check out both the headsets and let us know which one would be your pick in the comments below.