Oculus Quest and HTC Vive are two headsets that are pretty interesting and the best within their own niches. The Oculus Quest is probably the best standalone headset out there and the Vive is the best PC VR headset.

The Quest is a newly released standalone headset and one of the best headsets while the HTC Vive is the best PC VR headset.

So, in this comparison post, we would discuss every feature on both the headsets in detail and see which headset is a better investment.

If you are making a purchase decision then do read the review until the end as it will be really helpful. So without wasting any more time, let’s get started-

The HTC Vive has a classic VR headset design and to be honest, it is one of the older VR headsets that released a few years back and since then there are very few headsets that have been able to compete with the quality that you get from the Vive headset.

The Oculus Quest has definitely made some improvement especially when it comes to external light leakage.

So, there is barely any external light leakage sneaking in from the corners of the headset making the experience really immersive.

There was a slight light leakage concern with the Vive and the other headsets that were released during the same year. Since the Quest is a newly released headset, you find the developers to have taken care of this issue.

Since the Oculus Quest is wireless, wearing this headset and roaming around becomes really easy during gameplay sessions as you do not have to meddle with a lot of wires while you are having a nice gaming session.

The Oculus Quest definitely has a much better screen resolution which means that the image on the Quest is going to be sharper and clearer in comparison to the HTC Vive.

The lens on the Vive and the Quest are both OLED lenses which means that you get pretty much similar color clarity just that because of a higher resolution on the Quest, the images are going to be more crisp and better to see in VR.

The HTC Vive comes with a room scale tracking and it even has the capacity to track the movement of your fingers. Basically, when it comes to tracking, the Vive can do a lot more than one can imagine.

It can basically track the slightest of movements that you make and you can easily translate it in the VR world. The Vive uses external sensors in order to do so, also called as lighthouses.

The Oculus Quest, on the other hand, is a standalone headset with sensors on the headset which helps it in tracking movements.

The controllers that come with this headset are pretty similar to the Oculus Touch controllers and they give you a really interactive gameplay experience.

The feel of the controllers is pretty amazing as they fit your palms like gloves. It gets easier to reach all the buttons on the controller making it easier to operate while gaming with the headset on.

The controllers on the Vive are similar to that of the Quest headset but a bit larger. So when you look at them they almost look similar with a few differences and the size being a huge difference among them.

It is worth noting that Oculus Quest as a standalone headset comes with battery life while the Vive is connected to a PC and hence you do not have any battery in this case.

The Vive, on the other hand, is not a standalone headset and needs a compatible PC in order to operate. So there is no such thing as battery life since you would be plugging in the headset to the PC for power supply.

If you want to know, whether your PC is compatible with the Vive or not then you can do so by checking out the PC specifications on the official HTC Vive website.

Games on the HTC Vive and the Oculus Quest

They have so many new VR game releases every day and almost every game that you get on the Oculus Rift is available on the Vive sooner or later. 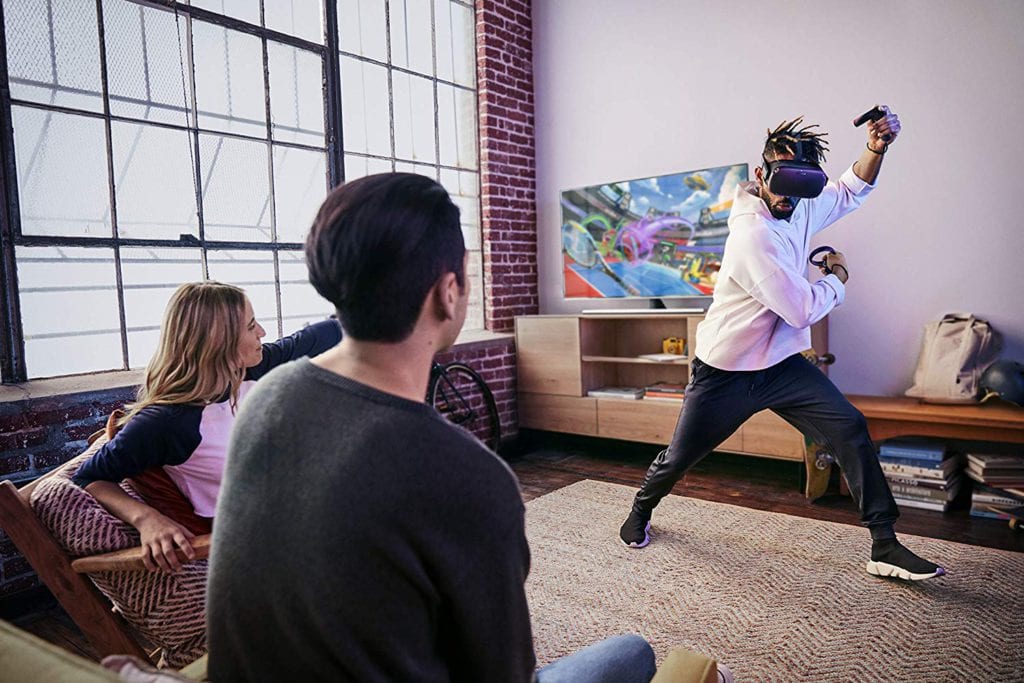 Once you browse the gaming options on the Vive, you would know that you have way too many options and the list for new releases is endless.

The Oculus Quest, on the other hand, is no less. You are going to have the newly released games for the headset and on top of it, Oculus has said that almost every game on the Rift S is going to be playable on the Quest.

This means that you have so many games to play on the Quest. Both the headsets have a lot of cool games and you need to check out the Oculus Store and SteamVR website to know more.

Both the Oculus Quest and the HTC Vive are amazing VR headsets. If you have a laptop or a PC that can handle the Vive then I would say go for the Vive headset.

But, if you want a standalone headset that would give you some amazing gameplay experiences then I would definitely recommend the Oculus Quest

So the choice is completely yours and it really depends on your needs. Both the headsets are amazing in my opinion and if you barely use a VR headset then the QUest is definitely a better option as there is some ease of use there.

The Vive requires you to plug in quite a few wires before you get started and if you are not up for that after a long day you have had at work then the Quest is definitely the one.

Which one of these two headsets is your favorite? Let us know in the comments below!