Now, it is time to compare the new Oculus Rift S with the Vive. Since the price of the two headsets is very close, it is going to be really confusing to know which one is the better headset than the other.

The Oculus Rift S has certainly had a few updates from the Rift and a few of them are the Inside out tracking, reduced wires, change in refresh rate, etc.

It is definitely going to be interesting to see how every feature of the two headsets compares so without any further ado, let’s get started with the comparison.

The design of the Oculus Rift S and the HTC Vive is going to be different because both these headsets were released in different years.

The Oculus Rift S comes with the Halo strap along with some additional features like the passthrough feature, LED display, inside out tracking.

The HTC Vive is the OG, comes with a three-way strap and doesn’t have the features like passthrough or the inside out tracking.

The Oculus Rift S does look premium but I have always been a fan of how the Vive looks and feels. You are going to find both the headsets comfortable and they do look like premium quality VR headsets.

The Oculus Rift S has only one wire which you need to connect to the PC or the laptop while the HTC Vive comes with multiple wires that you would be connecting to the PC.

This makes the Oculus Rift S the more portable VR headset among the two.

The HTC Vive has an OLED display so the colors feel more life-like rather than an LCD display where you can find the colors to be harsh.

There is a difference in the resolution and you would be able to see that during your gameplay but overall if you are using the headset for the first time, then you would be pretty much satisfied with the performance of both the headsets.

There are so many comparison posts on this blog and I have always said this- decreasing the refresh rate on the Rift was not a good idea.

There are so many other ways in which they could improve the rift and the refresh rate going down to 80 Hz is really a bummer.

The refresh rate on the Vive is a decent 90 Hz and the FOV on both the headsets remains 110 degrees. The higher the refresh rate, the less motion sick you are going to feel.

The Vive seems like a better option for me when these two features are considered. You are going to love everything about the Vive when it comes to the features expect just one issue which I would discuss later in this post.

This is where there is some real difference between the Oculus Rift S and the HTC Vive. The HTC Vive comes with two lighthouses which are sensors that are needed to be set up in the gaming room for precise tracking.

If you are okay with all the wire management that comes with it then you can go for the Vive. Because apart from this downside everything else with the headset is perfect.

The Oculus Rift S comes with inside out tracking which means you do not need to set up any external sensors like the HTC Vive. There are cameras on the headset that are going to track the controllers that come with the Rift S.

This simplifies the entire setup as you have just one wire that runs from the headset to the PC.

The tracking on both the headset is pretty amazing, however, something that is worth mentioning is that the Rift S does have the battery covers loosely placed so it can come off while you are in the middle of a VR game.

This is not a deal-breaker when it comes to buying a headset but definitely inconvenient. Overall, the Rift S is a more portable headset that one could go for.

Games on the Headset

Gaming on both the headsets is pretty good and they have very similar gaming platforms as well. Both the headsets can play games from SteamVR and you have more than a thousand games on that platform. 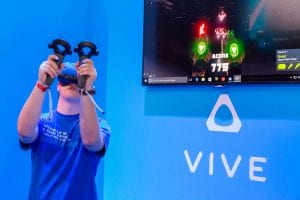 Both the headsets come with some amazing games and you do not have to worry about the content on these two headsets as you are not going to be disappointed.

There are a ton of VR games that you can play and most of teh games are pretty similar on both the headsets.

You can even play a game that is available on the Vive on the rift S and vice versa.

The Gameplay is, however, more convenient the Oculus Rift S because of fewer wires due to the inclusion of the inside out tracking that has made it possible.

Otherwise, the VR experience on both the headsets is amazing and there are a few features where we had to take sides with teh Vive. But considering the setup, I had to say the Rift S would be my preference as it makes things easier.

The HTC Vive and Oculus Rift S are both amazing headsets and you can choose any one among the two as they both have some pretty amazing features to offer.

When it comes to picking one, I think I would go with the Oculus Rift S for the only reason that it comes with inside out tracking which makes everything so much easier.

If you have a huge gaming room then you can go with the Vive and do some wire management but otherwise, in most cases, I think the Oculus Rift S will be my preference.

The Vive is not a dud in any way but the tedious setting up process every time you want to play in VR is a little annoying along with all the wires.

Since the Rift S is a recent release, it is better in that aspect as Oculus has made several improvements from the previous Rift headset.

So, which one would you prefer among the two?

Let us know your thoughts in the comments section below!