The fact that you can sync videos to Fleshlight Launch things just get even more interactive and immersive.

VR Quality with the Oculus Quest

Oculus Quest is a VR headset that is priced as much as a gaming console and is a wireless standalone headset like the Oculus Go so you do not need any PC, console or smartphone to power the headset.

This headset is all you need to enjoy some really immersive VR games and experiences. The headset is pretty comfortable to wear but wearing it for a long time can cause some strain at the back of your head. 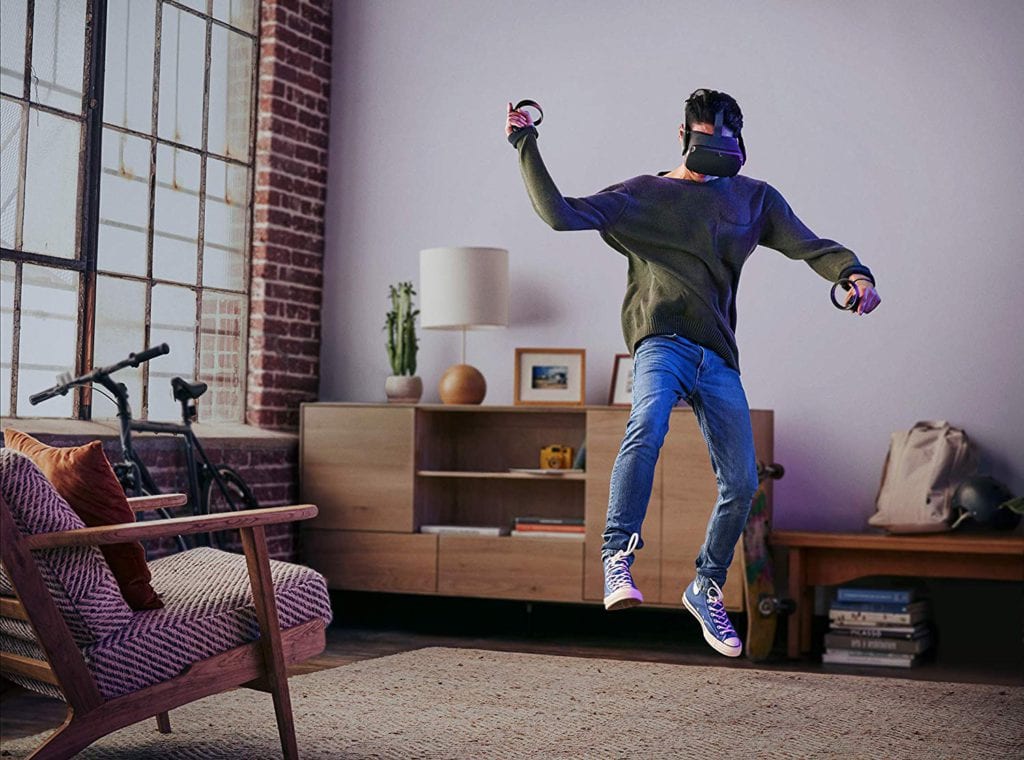 This happened with the Oculus Go as well, so there is not much to complain about as you find that issue with any VR headset when worn for a really long time.

The battery life on the Oculus Quest is going to last you for about 2 hours and with the same compatibility as the Oculus Rift, you are going to have a lot of options when it comes to games and apps.

The Oculus Quest also comes with a 6DOF as compared to the Oculus Go which makes your gaming experience so much better. Imagine getting a Rift-like experience without being connected to any PC.

Oculus Quest comes with a pair of controllers as well which look very similar to the ones that come with the Oculus Rift making the gaming experience interactive, unlike the bland remote that came along with the Oculus Go.

I think the 6 DoF with this headset is a huge advantage when it comes to enjoying VR content as this makes the experience more interactive and you get it for the price of a gaming console which is a pretty good deal.

The three websites that have the best HD quality videos and the ones that I personally use are BadoinkVR, VirtualRealPorn or VRPorn.

Now, there are quite a few VR adult websites out there that come with mediocre quality of videos which might be due to the storyline, the actors or the overall set where they shoot the videos.

This is so not the case with BadoinkVR or VirtualRealPorn, making it one of the reasons why I have been a member of these two websites for quite some time.

The clarity and zoom in quality with these websites are so amazing that you feel like you are inside the VR video.

VirtualRealPorn is one of the best websites out there for many reasons. The membership of this website is really affordable and you have a TON of videos on the website and the content library just keeps growing by the week.

There are even different categories that you can browse making this one of my favorite websites from all the other paid sites out there.

SO, these are our picks and you can let us know yours in the comment below!

Fleshlight launch and KIIROO Onyx 2 are a few sex toys that we usually recommend for men and women can go for the KIIROO Fuse.

So, the fact that the Oculus Quest is going to be compatible with all the videos and games on the Oculus Rift, you might even be able to play some adult games on this headset.

Fleshlight launch and KIIROO Onyx 2 are a few sex toys that we usually recommend for men and women can go for the KIIROO Fuse.

So, the fact that the Oculus Quest is going to be compatible with all the videos and games on the Oculus Rift, you might even be able to play some adult games on this headset.

Because of the wireless VR headphones, I enjoyed myself to the max. Just sitting back and enjoying the video while my hands are free because the Fleshlight Launch is doing the stroking for me.

Zooming into the areas around the house to test the quality was a new experience as well. You get to see how deep the Oculus Quest can go.

The device works amazingly well with the headset and hence I would definitely recommend getting it!

What else can the Oculus Quest do?

Virtual reality offers a lot of worlds while staying in one place. Oculus Quest has access to almost all of those worlds. You can play games in the Oculus Quest with a higher range of motion and a better resolution than the Oculus Rift

You can also use the headset when you are traveling and you want to watch a movie. Everything is now possible anywhere.
Since you do not have that jumping rope cord with the Oculus Quest, it can be considered as a mobile device and you can play it wherever you are.

Just make sure that you do not disturb the people around you while playing. With more applications being developed for offline experiences, you can make sure that the Oculus Quest will not go out of date anytime soon.

The 6 DoF with spatial tracking lets you enjoy movements that do not limit you in one room. That means that you do not have to experience the hassle of setting up trackers in every room that you get into.

With an improved display compared to the Oculus Rift, the Oculus Quest has a more immersive display. Combine it with an amazing sex toy and it is a full-on virtual reality experience.

So what Oculus stated was that your data will not be shared with anyone on Facebook unless you chose to log in via FB login. Oculus also said that your complete browser history is not transmitted to their servers.

The details about your profile will not be recognized by their servers as it only collects data from domains to improve the website. Oculus also clarified that the data they have collected is only stored for 30 days.