Without wasting any more time, let’s get into the review.

2. The foam padding on the VR headset is pretty comfortable and it has a nice cushioning effect that minimizes the light entering inside while you are wearing the VR headset. This makes sure that the VR experience is immersive. 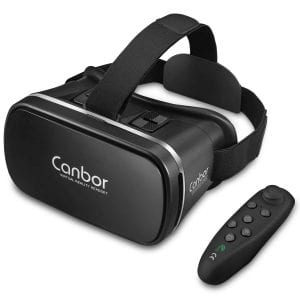 3. The VR headset is slightly huge but the three-way strap distributed the weight pretty well and you can use it for 45 minutes without any issues. The straps and the foam padding are pretty comfortable.

4. The VR headset has focal adjusters which can help you focus the lenses on the image and have a better VR experience. Since the IPD is different for different people, it is important that the VR headset comes with that feature, unlike many other VR headsets.

5. The box includes rubber strips which can be fixed in the corner of your phone so that the power button or the volume button does not come in contact with the spring loaded arm holding the phone and create any issues like switching off your phone or sudden reduction in volume. 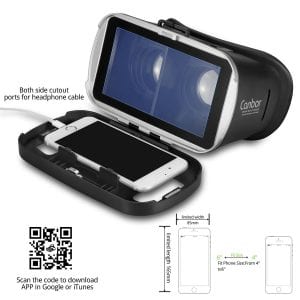 6. The front of the VR headset has a magnetic lid and it opens up when pushed back giving you space to insert the phone. The VR headset can hold phones with screen sizes ranging between 4-6 inches.

3. The VR headset is pretty good for the price. I have received a few VR headsets that were really not that good but had great reviews on Amazon, so I think that either most of the reviews on amazon are paid or there is no uniformity in the manufacturing of these VR headsets.

4.The VR headset does have focal and IPD adjusters but I really do not like the gap that the lenses leave between the headset making the gap exposed directly to the phone screen which is really annoying. It takes out the immersive experience which is very important to have a great VR experience.

You might need a Bluetooth controller for using the Google Cardboard app and it is better that you invest in a good controller rather than the cheap $7 controllers that are available on Amazon. Try investing in a Moga controller which cost around $17 because they work pretty well and last really long, unlike the cheap controllers where the functionality of the controller depends on your luck.

The Canbor VR headset is good but not as great as you might expect it to be. If you want to get a taste of VR then you can try out this headset but if you really want to play games and have a premium VR experience then you must go for one of the premium VR headsets that we recommend.

The Canbor VR headset is good for the price and you may like it if you just want to watch a few YouTube Videos and have some 360-degree video experiences. It is great that way but for some serious gaming and a way immersive VR experience I would definitely recommend the Merge VR or the Samsung Gear VR.

Both the recommended VR headsets are priced at $59.99 and $45 which is double the price of the Canbor VR headset but they are definitely worth it. Do let me know what you think about these VR headsets and in the case, you have any other questions, write them in the comment section below and I would be happy to help.

Do not forget to share it with your friends and family!

If you have any experiences with the Canbor VR headset then leave them in the comment section below.