There were quite a few questions from our readers and they wanted to know if the Fleshlight Launch worked with the Oculus Rift.

Honestly, we all want it to but in reality, we do not always get what we want. So a simple direct answer to this question is a NO.

There might be different work rounds on the internet but most of them tend to be a little risky and that is the reason we do not recommend them.

The Fleshlight launch has to be connected with the FeelMe app for which it does need a phone with Bluetooth connection.

This is one of the major reasons that the Fleshlight launch is compatible with only smartphone-based VR headset at the moment.

This makes it a little difficult to connect the devices with headsets like the Oculus Rift and the Oculus Go. Although there can be a few ways that you can do it, since they are risky, it is not something that we would recommend.

So, as of now the only VR headsets that are compatible with the Fleshlight Launch are the smartphone-based headsets like the Gear VR, Daydream VR, Merge VR and Homdio VR headset.

Something that I totally understand is that the quality of VR on a smartphone based VR headsets is not that great.

I would personally not watch adult VR in a smartphone-based VR headset provided I have no other option whatsoever.

If you are watching quality adult content on the Oculus Rift, you are already halfway there for an immersive experience and then once you use the Launch in the automatic mode, things just get even better.

How you can use the Launch with the Oculus Rift?

Well, the only way is to use them separately. The Fleshlight launch has several modes and if you are planning to use it while watching the adult VR content then you are in for a treat as you are going to love the experience. 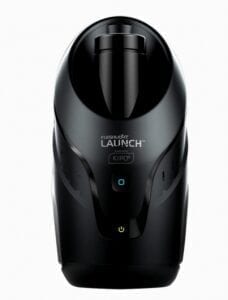 Now, the first thought that came to my mind was what is the point when you cannot sync the device with the videos.

You almost feel like the actress is doing things to you which in reality it is being done by the Fleshlight Launch. This gave you the feeling like the launch was kind of in sync with the video making the experience interactive.

Let’s face it, the penis is not going to differentiate between the motions done by the actress and the Fleshlight launch, making this sex toy even more interesting to use with the Rift.

So, the Fleshlight Launch on its own can be used in so many different ways.

You are definitely not going to be disappointed if you get the device and when it comes with using it with Oculus Rift, sadly you just can’t sync it as of now, but that does not mean you cannot have fun.

==> Get the Best Deal on Fleshlight Launch

You can use the code ULTRASEXY to get 10 percent off on select items. This is a limited offer to my readers so be sure to redeem it today!