Samsung Mixed Reality VR headset is the last one to the party after the releases from other companies like Dell, Asus, Acer, HP, and Lenovo. This Samsung HMD Odyssey Review is going to discuss all the small details about this VR headset.

If you had planned on getting the Samsung  HMD Odyssey VR headset then definitely continue reading this review.

Design of the Headset

The Samsung Odyssey Headset does not have a flip visor like the Acer VR headset but it is definitely better in design when compared to the Rift.

You can wear this VR headset over your glasses and since I have glasses, I found it easy to use even without them by just adjusting the interpupillary distance between the lenses.

However, I must add that the power I have is -0.75 which is not that much but it still makes me feel uncomfortable to be in the VR world without my glasses and having different eye power in both the eyes makes it even more difficult to see clearly in VR.

I had my problem sorted as I wore my glasses and then wore the VR headset on top. It would be better if you wore lenses and adjusted the IPD on the headset until you can see clearly. 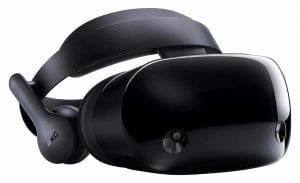 The overall design of the headset is pretty simple and it weighs around 600 grams. Even though the headset weighs more than the other Mixed reality headset on the market, it is really pleasant to wear.

I guess, the weight distribution of the headset around your face makes you feel like you are not wearing anything particularly heavy.

The headset is pleasant to wear and you can easily wear it for long periods of gaming without any issues.

The headset has an AMOLED display which is far better than the LED display on the other MR headsets. The ones from Acer is very dull and the colors are not that bright and vibrant.

In the case of the Samsung Odyssey Headset, it uses the AMOLED display which is used by them in their phones as well. This gives you a much better VR experience in comparison to the other MR headsets out there.

If you ask me I would say that the visuals on this VR headset were much better with  2880 × 1600 px which is split into two lenses.

The overall clarity was impressive and if you think that it cannot compete with the Rift or the Vive then I suggest that you think twice.

Considering all the Mixed Reality VR headsets that we have, I must say that this one from Samsung has aced them all, if you are interested in getting an MR headset then I would definitely recommend the Samsung Odyssey.

The Field of View on the Samsung Odyssey is 110 degrees which is pretty good and it gives you a nice wide VR screen to look into.

The MR headset has a refresh rate between 60-90 Hz which is pretty good in comparison to all the VR headset we have out there. You are not going to feel motion sick on this VR headset and that makes the whole VR experience pleasant.

Something that was unusual about this headset was that you never feel motion sick at any instance. It is way more comfortable than the Oculus Rift and the HTC Vive as you do tend to feel motion sick sometimes with these headsets but that was not the case with the Samsung Odyssey Mixed Reality headset.

Overall, amazing VR experience and definitely we could feel that it was a newer generation headset as it felt way more comfortable to play games without having to deal with motion sickness.

The headset comes with two controllers that give you an interactive VR experience. The controllers work really well and they are pretty comfortable as well.

The headset comes with inside-out positional tracking and you do not need sensors like in the case of the Rift and Vive as all of it is inbuilt inside the headset.

This makes this VR headset really easy to use and you do not have to struggle with mounting the sensors and everything like you had to do in case of the Oculus Rift and Vive earlier. 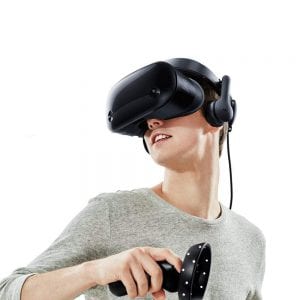 Vive does come with full-scale room tracking and that made it necessary that you have a dedicated space for VR gaming but that is so not the case with this Samsung Odyssey Mixed Reality VR headset.

You can easily use this headset with controllers anywhere in order to enjoy some VR gaming.

Sound Quality on the Headset

Another amazing feature of this VR headset is the sound quality. The in-built headphones on the VR headset give you an amazing audio effect in the VR world which makes this headset stand out in comparison to the other Mixed Reality headsets in the market.

Sound quality is really important if you want to make your VR experience immersive and you get that from the Samsung Odyssey Mixed Reality headset.

So, the overall VR quality on this headset is top notch and you are going to really love the immersive experience.

PC Specifications for the Samsung Odyssey

The PC specifications for the Samsung Odyssey is something you should consider before investing in this MR headset.

One can definitely say from the minimum specs for this headset that the PC you need to a laptop with beefy specs. If you want the detailed specifications then you should check out the official page for Samsung Odyssey.

Games on the Samsung Odyssey

The gameplay on the Samsung Odyssey was pretty good and I must say that the colors and the entire VR experience is immersive.

The amazing sound quality from the headphones is an added advantage to make gaming much better. There are plenty of games that you can find on the Samsung Odyssey VR headset and if you want some recommendations then watch the video below!

Overall, we really loved this new Mixed Reality Headset. If you are looking for an amazing VR headset with excellent sound quality and within $500, then this might be your calling.

In comparison to the other MR headsets that have been released this year and the last yes, we must say that the Samsung Mixed Reality VR headset is pretty amazing and probably the best.

The Virtual Reality experience on this headset gets very close to that on the Oculus Rift and the HTC Vive. So, if you want a premium VR experience then you should definitely check out this headset.