Sarlar VR headset is another one of the best selling VR headsets on Amazon and by now I think I am literally tired reviewing these VR headsets. Sarlar VR headset review would give you a detailed review of the VR headset and let you know if it is worth the money or not, so without any further ado let’s get started

Field of View: 100 degrees(said by the manufacturer but it is not lower than 100 degrees)

What I liked about the headset

1. The headset is pretty simple, it has a three-way head strap and you can find the headset sit comfortably on your head. It is pretty comfortable which is worth mentioning because usually, the lower end VR headsets do have some glitches while manufacturing making the VR headset uncomfortable to wear.

2. The VR headset does have a sleek design and the headset is made up of an average quality material which makes it less bad than the other lower end VR headsets that you find in the market. 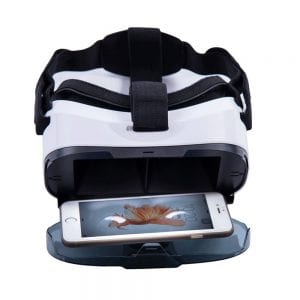 3. The front of the VR headset opens up where you can insert your phone. You can use any phone with it provided it has a gyroscope which most of the new phones these days have and a screen size between 4-6.2 inches. The VR headset secures the phone firmly with the help of the spring loaded arms present on the inside of the VR headset.

4. There was enough room for your nose in this VR headset. There are a couple of VR headsets which were uncomfortable at the nose because of the limited space as given in its design. However, this VR headset is pretty comfortable when it comes to the design of the VR headset. 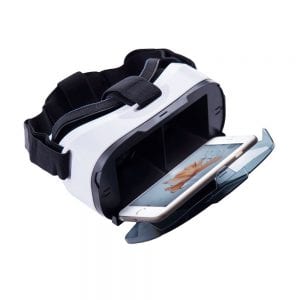 5. There are no Focal and IPD adjusters and the makers claim that there is no need for one because of the clear VR projection without these adjusters. The diameter of the lenses is 40 mm which implies that the lenses are pretty huge in comparison to the other VR headsets making the VR experience much better compared to the experiences in the rest of the Chinese VR headsets in the market.

1. The VR headset has no focal and IPD adjusters, I don’t know if the inclusion would have made any difference anyway because there are many VR headsets that give poor quality VR experience even after including the adjusters. In this case, there are no adjusters to start off so if you are seeing double images then there is no way you can correct them.

4. The headset company should have considered including a Bluetooth controller for easy navigation and gameplay since it does not even have a magnetic trigger which would help in easy navigation within the Google Apps.

There are plenty of free VR games that you can download on your phone. You can play these games once you insert your phone inside the VR headset. Most of the games that are VR compatible are free (in a few cases it is the demo) and you can play them without any issues. You may need a controller because there is no magnetic trigger and there are a couple of games that you just cannot play without the controller.

Usually, when I get these products, I instantly find something wrong and then just pack it and send them back.  In these smartphone VR headsets, one even finds it difficult to focus a youtube video in order to view it in VR which is completely annoying but in the case of the Sarlar VR headset, I wasn’t really impressed by the VR quality. Having no focal adjusters and IPD was a big turn off.

It was an overall average product and for the price of $30 you could spend a bit more and invest on premium VR headsets like the Gear VR which is for around $45 after discount and the Merge VR.

The premium VR headsets can be slightly expensive but they are worth the money. They provide excellent VR quality and would last longer. The gameplay in these VR headsets is far more immersive and amazing.

If you really are looking for a long term investment then these premium VR headsets are the way to go but if you want a cheap and affordable VR option then you can give Sarlar VR headset a try.

If you have any further questions leave them in the comment section below and I would be happy to help.