The Xiaomi VR headset(toy edition) was the one which had created a lot of buzz since it was cheap and looked like a better yet similar version of the Google Cardboard. The new Xiaomi VR headset looks a bit like the PlayStation VR and has the functionality of the Gear VR so yeah, I guess there is a reason for these Xiaomi headsets to be a late entry in the VR competition, LOL.

Without wasting any more time let’s see how these VR headsets are in the build quality and how good are the VR experiences.

1. The VR headset looks elegant and nice with the sleek black and white finish. It definitely looks like a premium VR headset and the quality of the VR headset is above average, unlike the cheap VR headsets that we have reviewed before.

2.  The headset has a lot of cushioning on the head strap which makes it pretty comfortable to wear and it has a lot of soft padding which avoids any light leakage inside the VR headset making the experience less immersive.

3. The headset comes with focal adjusters so it suits people wearing corrective glasses and you can adjust the distance between the lenses of the VR headset and your eyes with the help of these focal adjusters. 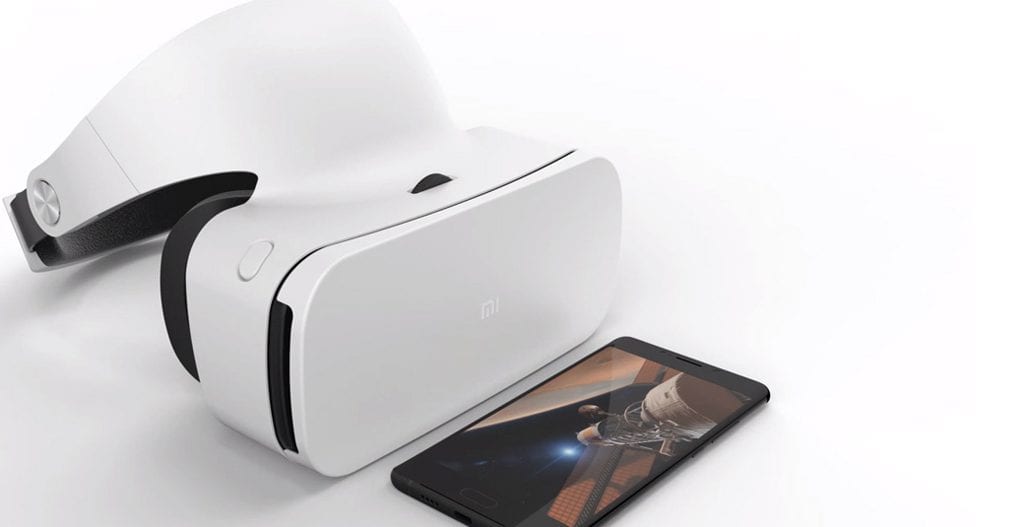 4. The headset has got a hint of the Daydream VR as well since it includes the remote which has a touchpad and two keys which are the home and the back button. Apparently, the gaming experience with the remote is pretty impressive since it is more like the trackpad of the Gear VR but it is on a remote.

5. The headset has an FOV of 103 degrees but it is somewhat around 90 degrees and it does provide some quality VR experience through its lenses. The lenses look small but are not that small such that they disrupt the VR experience.

7. The controller is really easy to use and it has a trackpad which is similar to the one on the Gear VR, however, it is not as good as the Gear VR but yet not that bad.

1. The VR headset has no nose room and it is really painful if you wear it for a really long time. This can be r annoying and painful at the same time. There were many complaints on the same problem and we hope that the newer version of this VR headset which is the Xiaomi Mi VR Play 2 does not have the same issues.

2. The headset is white in color and that can cause some internal light reflection which is not a major setback but neither is it fun to have to pay so much for a VR headset and end up with a bad quality of VR experience.

4. The VR headset works with the phones having the MIUI 8 software and apparently if you have an upgraded version then it could be a problem. You need to be sure of what is your phone’s OS, although you can make the changes but that is another headache.

5. The least they could do was cater to all the OS that they have on their phones which are limited because of compatibility issues and then release the VR headset with enough nose room, LOL.

Being late in the VR headset hustle, you need to be good to beat all the existing amazing VR headsets. There have been other VR headsets where I have had zero problems so even if you might be able to resolve most of the setbacks, I would rather recommend you to invest in a VR headset that actually comes without such annoying issues.

The Xiaomi VR headset could have been way better than what it is currently, although it is not bad, it is definitely not something I would recommend when you have better VR headsets in the market. However, if you want to, you could always check out this VR headset and let us know your thoughts about it in the comment section below.

If you are investing in a VR headset then you should better go for premium headsets like Gear VR or the Merge VR since these are the VR headsets that are here to stay. Trust me you do not want to have a blurry mess while you are watching VR videos especially the 360-degree videos or adult content.

=>Check out the Xiaomi VR headset
There are other premium VR headsets like the Merge VR and the second option to it would be the Noon VR plus or the Homido VR provided you don’t have a Gear VR compatible phone. If you have a phone compatible with Gear VR then that should always be your first choice. The Merge VR comes with a 30-day money back guarantee and a year warranty so if you want to buy it then do purchase it from their official website.

In the case you want to ask any questions, then leave them in the comment section below and I would try to get back to you as soon as I can.

If you liked the post then do not forget to share it with someone who owns a Xiaomi phone!